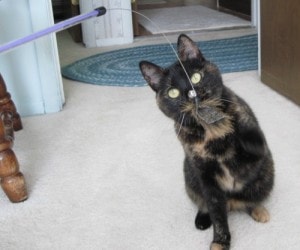 Interactive toys are a great way to keep your cats stimulated both mentally and physically, and a great way for both you and your cats to get in on the fun. Toys such as feather teasers, wand toys or fishing pole type toys can provide hours of fun for you and for kitty. Playing with your cat is not only fun, it also increases the bond between the two of you.

Of course, cats also have a fairly short attention span and get easily bored with the same old toys, so I’m always looking for new wand toys to keep Allegra and Ruby engaged and interested. All three of us were delighted when Tiger Teasers sent us one of their Synthetic Fur Toys to review. We also received some “Bunnies,” which are corks covered in synthetic fur.Continue Reading 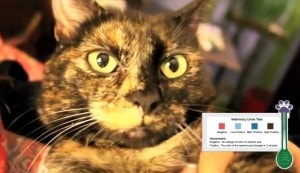 Feline obesity has become an epidemic: a staggering 53% of America’s cats are considered overweight or obese. Obesity can lead to serious health problems in cats, including diabetes and kidney failure.

Regular home-testing can help detect abnormal conditions at an early stage, enabling your cat to get timely veterinary treatment. This is especially important for cats, who are masters at disguising symptoms until an illness is often in the advanced stages, making treatment more costly, and often more complicated. 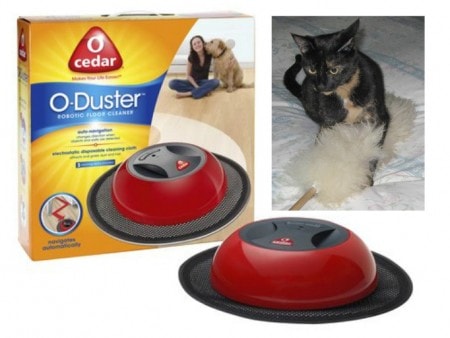 How many times have you vacuumed or dusted and the thought crossed your mind of how nice it would be to have a robot who could do that for you? There are quite a few robotic floor cleaners available, but the price tag of several hundred dollars makes them prohibitive for a lot of people. Now there’s a new player on the market: O-Duster™. At $39.99, available from Amazon and other online retailers, robotic floor cleaning is now affordable for everyone.

I was sent one of these to test, but it totally spooked Allegra, and I aborted the test, so I unfortunately, I can’t share any personal experience with it. And yes, that’s her giving the O-Cedar the stink eye in the photo montage above: as far as Allegra is concerned, any dusting at our house will continue to be done the old-fashioned way!

For those of you with braver kitties, the O-Duster™ may be worth a look. Its auto-navigation feature is desgined to cover all hard floor surfaces. Its flexible base is able to reach into corners and along edges while the compact design slips under sofas, beds and other furniture to grab dust and pet hair.Continue Reading 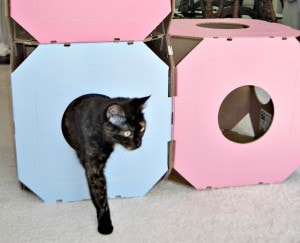 The tagline for Cattystacks’ modular cat climbers is simple: “Because cats love boxes.” The designers of these cubes, made from industrial strength corrugated cardboard, took this concept a little further and created these esthetically pleasing boxes that come in a rainbow of fun colors.

I purchased three of these stacks for Allegra and Ruby a couple of years ago, and they still provide daily fun for both of them. Whether it’s climbing, hiding, stalking, or using them as an elevated vantage point to view the world, the girls use these stacks almost every day. 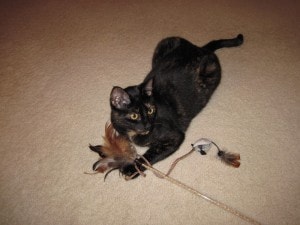 As you know from Allegra’s last post, she is most definitely not lacking for toys.  Nevertheless, I was delighted when the folks at Play-n-Squeak products offered to send us a couple of their new Play Wand toys for Allegra to test.  And Allegra was over the moon with excitement when the toys arrived.

These folks know cats.  The press release announcing these toys was titled “The Tiger Inside:  Crouching Tiger, Hidden Hunter” – a clever header for explaining that these toys are designed to encourage indoor cats to exercise their natural hunting instincts.   For our indoor cats, who don’t have to worry about hunting down their dinner, toys take the place of prey, and the best toys are those that mimic prey behavior.  The toys that do this best are interactive, fishing-pole type toys.   They not only make it easy to encourage cats to play, but because they require a human on one end of the toy, they also strengthen the bond between cat and human.

The Play-n-Squeak wands incorporate everything kitties love in a toy.  We tested the Tiger Teaser©.  It consists of a nice, sturdy handle with an equally sturdy, thick rope attached to it. It has a feathery tuft at the top of the pole and a fuzzy mouse at the dangly end.  Not only is the mouse stuffed with catnip, but it’s got some kind of electronic gadge inside that is motion-activated and meant to mimic the squeak of a real mouse.  Even though it sounded more like a bird to me, it certainly got Allegra’s attention.  The mouse squeaks each time it’s batted, and even when it’s just swung through the air or dragged along the floor and furniture.  Allegra couldn’t decide what she liked better:  the sqeaking mouse, or the feathery tuft at the top of the rod.  I actually managed to exhaust her with this toy – not an easy feat.

When you play with your cat using an interactive toy, whether it’s the Play-n-Squeak or any number of other fishing pole toys on the market, try to imitate the hunt.  Make it interesting for you cat.  Drag the toy across the floor, up and down furniture, around corners, up and down stairs.  Let your cat catch the toy occasionally to keep it fun for her.  When you’re ready to end the play session, don’t stop abruptly, instead, slow the toy down, pretending it’s a wounded animal that is getting tired.  Let your cat catch the toy one last time before you put it away.  Never leave interactive toys out for your cat to play with on her own, they should only be used when you can supervise.  Cats can easily get tangled up in the strings and ropes of these toys if they play on their own.

The Play-n-Squeak wands toys are available online or at pet retailers near you.