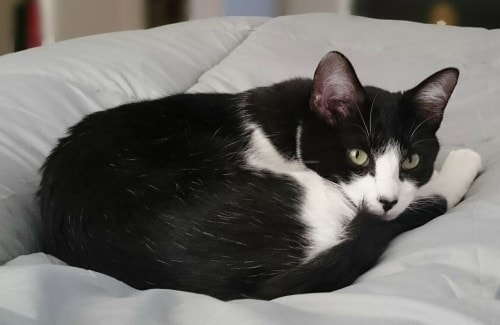 Cats are masters at masking pain. This ability to hide pain goes back to their wild origins; in the wild, a sick animal becomes prey. While acute pain may be fairly obvious to cat guardians, it may be more difficult to discern whether your cat is in pain when it comes to chronic pain from conditions such as arthritis. Sadly, even some veterinarians still overlook signs of feline pain, or are not aggressive enough in treating it.Continue Reading

Cats are masters at hiding pain. By the time a cat guardian recognizes that a cat is painful, chronic pain may already have a considerable impact on the cat’s quality of life. This can be especially true when it comes to arthritis, a degenerative joint disease that affects as many as 3 in 10 cats. Only 7% of cats with arthritis receive treatment for this often debilitating condition.

While there are conventional pain medications that can help control feline pain, most come with considerable risk and negative side effects. The Assisi Loop provides safe and effective pain relief without adverse effects.Continue Reading 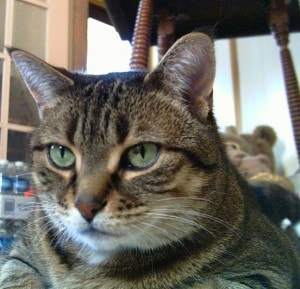 Living with a senior cat has rewards as well as challenges that are a bit different than those encountered when living with a younger cat. Pain is, of course, something we don’t want to see in any of our pets. However, senior cats are more likely to develop conditions and illnesses that create pain and discomfort. Arthritis is a common but often unrecognized disorder in older cats. In one study, 90 percent of cats over 12 years of age showed radiographic (X-ray) evidence of arthritis*.

Unfortunately, recognizing arthritis in cats is challenging at best. Many of our cats hide their pain very effectively. While we may sometimes see our older cat limping or favoring one leg or another, more often than not our arthritic cats simply become less active. They spend more time sleeping and resting. They may be reluctant to jump onto surfaces that were easily accessible previously. In fact, many of us mistake these symptoms of arthritis for normal aging. Too often, we simply assume that it’s normal for an older cat to sleep moreContinue Reading

Cats are masters at not showing pain. This instinct to hide pain is a legacy of their wild origins. In the wild, an animal that appears to be sick or disabled is vulnerable to attack from predators, and survival instinct dictates to act as if  nothing is wrong, even when something most definitely is.

This presents a challenge for cat guardians trying to assess whether their cats are experiencing acute, or even chronic, pain. Often, subtle behavior changes are the only clue that something is wrong. Look for the following: 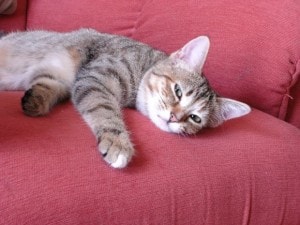 Within the next few months, there will be a new pain medication available for use in cats. Called Onsior®, the new medication has been approved by the FDA and is expected to be available to veterinarians as a prescription product for their feline patients within the next 10 months.

Because there are very few pain medications that have actually been approved for use in cats, Onsior® is a welcome addition to the arsenal of medications that can control feline pain. Onsior®, once available, will provide veterinarians and cat owners another weapon for relieving feline pain. Currently, when compared to dogs, the number of choices for pain relief in cats is somewhat limited.

According to Onsior’s manufacturer, Novartis Animal Health, “Onsior tablets are indicated to control of postoperative pain and inflammation associated with orthopedic surgery, ovariohysterectomy and castration in cats weighing at least 5.5 pounds and 6 months old. A tablet can be given to cats on an empty stomach prior to surgery and again for the next two days following the procedure.”

Onsior® contains, as its active ingredient, a drug known as robenacoxib. Robenacoxib is part of a group of medications known as non-steroidal anti-inflammatory medications, or NSAIDs. Historically, veterinarians have been cautious in using NSAIDs in cats because of the danger of side effects.

NSAIDs have been used extensively in dogs and there are many such canine drugs available, such as Rimadyl®, Etogesic®, Deramaxx®, Metacam® to name just a few. However, in cats, only Metacam® has been approved and widely used. Unfortunately, Metacam® has been responsible for kidney issues in some of the cats that have received the medication. As a result, the FDA placed a warning on the Metacam® label.

The concern with the new drug, Onsior®, is that similar problems might accompany its usage as well. So, while many veterinarians are cautiously optimistic about having a new option to relieve pain in cats, they are also somewhat fearful of the potential side effects of the medication.

Interestingly, both Metacam® and Onsior® have been used in European countries much more extensively for pain control in cats than here in the United States. And there have reportedly been significantly lower numbers of adverse effects with Metacam® than what has been seen here in the United States. The reason for this is unclear. One hypothesis is that the labeling for Metacam® is less restrictive in European countries than it is here in the US. As a result, veterinarians overseas have greater access to educational materials pertaining to the proper use of the medication. Here in the United States, the FDA has strict rules prohibiting the manufacturer of a drug from giving any advice about using the medication in an off-label fashion. As a result, the theory suggests that veterinarians here in the US have more limited access to the proper educational materials and are therefore less apt to use Metacam® in a safe manner than veterinarians overseas.

I’m not sure about the reason for the difference in safety between European countries and the US. Perhaps the theory about education is correct. I have used Metacam® for pain relief in my feline patients on occasion without any adverse effects. However, I have never used the medication in an off-label manner.

That being said, I am happy to see a new medication being made available for pain relief in cats. However, I will probably rely more heavily on choices that I am more comfortable in providing (buprenorphine, tramadol, etc.) until Onsior® has been around long enough and been used in enough cats here in the US to prove itself not only effective but safe as well.

Lorie Huston has been practicing veterinary medicine for over 20 years. Besides a successful career in a busy small animal hospital in Providence, RI, Lorie is also a successful freelance writer specializing in pet care and pet health topics.

Caring for your cat after surgery