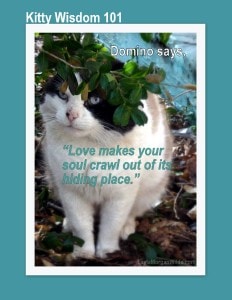 I know you’ve all been waiting to hear more about my new sister Allegra.  Things are going fine, I guess I’ve accepted she’s here to stay, and I’m kind of getting used to her, and that’s all I’m going to say about that today.   Because today’s post is all about me!

Today, I’m going to share a secret with you that I’ve kept close to my heart for a while, but I think it’s time to go public with it.  Some of you might have an inkling of what I’m getting ready to say if you’ve been reading some of the comments on previous Mewsings.  So – here it goes:  for the last few months, I’ve been in a long distance relationship.

My boyfriend’s name is Domino, and he lives in Westchester, NY with one of Mom’s online friends, Layla Morgan Wilde, who has a blog called The Boomer Muse (hmm – she and I must be kindred spirits on some level – Amber’s Mewsings, Boomer Muse….anyway, I digress).  Computer savvy cat that I am, I met Domino online on a regular feature on the Boomer Muse called Cat Saturday.  He’s very handsome.  I now know what humans mean when they say “my heart skipped a beat,” because that’s exactly what it felt like when I first saw his picture.  As I got to know him better, I found out that he’s a bit of a danger dude, which, I’m embarassed to admit, only added to his appeal.  He doesn’t actually live with Layla, he lives in her yard and on her porch.  See, he’s a feral cat, and even though he shows up regularly for food and even takes advantage of the warm nest of blankets Layla leaves for him in the winter, he refuses to come inside, no matter how hard she tries.  His freedom loving spirit won’t allow him to let himself be confined, even though it would make his life a lot safer.  My tough guy is a roamer at heart, and he can’t be tied down.  I worry about him, though – not too long ago, he got hurt when he defended his turf against an intruder cat, and for a few days, he not only didn’t look so good, but he wasn’t doing all that great, either.  Thank goodness Layla was able to mix some medicine in with his food and he got better.

But I’m not just attracted to his handsome physique and bad boy ways – I’m not that shallow!  Domino has a big heart, and I’m sure that underneath that tough guy exterior, there’s a big softie waiting just waiting for the purrfect female to tame his wild heart.  Sigh, a girl can dream, can’t she?  He showed his softer side the other day, when an injured raccoon found its way onto “his” porch.  Some of you may be familiar with the term “holding the space” – it means creating a quiet, safe and peaceful environment for another by  being completely secure and centered in oneself and focusing healing energy on  another.  Domino did that for the raccoon, setting aside his ingrained fear of humans.  You can read the whole story here.  My hero!

So now you know.  Domino and I communicate telepathically from heart to heart.  It’s not as good as being able to be together and snuggle, but it’s pretty nice.