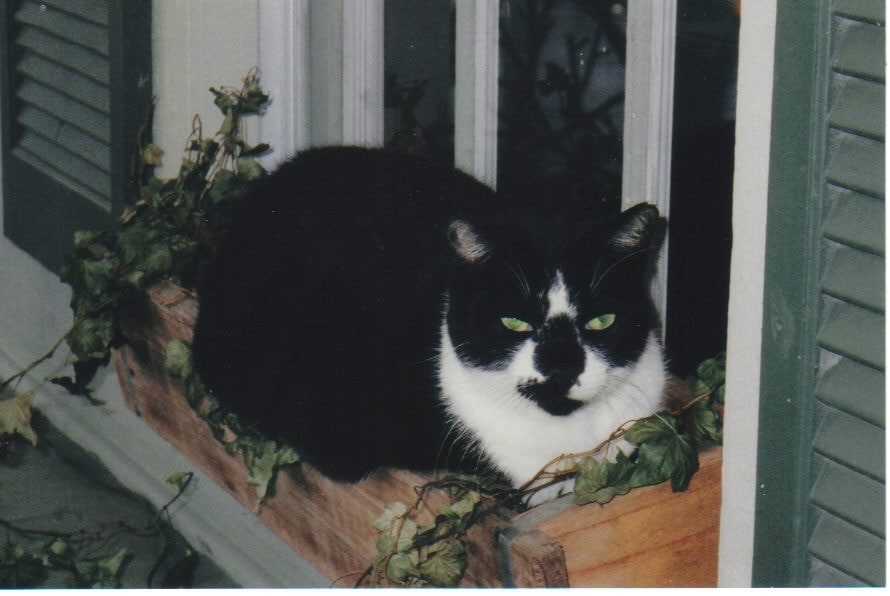 She was “mature” when I began working here six years ago.  With each passing year, more gray appears in her shiny black coat.  Once a sleek, panther-like feline, with four fashionable white mittens and a snowy white chest, she’s now a little rounder . . . and a lot slower.  (Aren’t we all?)  She has a narrow muzzle with long whiskers, a shiny black nose, and the longest fangs I’ve ever seen on a cat; they’re visible when she has her mouth closed! Her large green eyes are the color of the sea on the best day of summer.

Her name, befittingly, is Princess.  She was once the alpha cat, ruler of the feral colony living in the area around the art gallery I manage.  Now, she defers to the younger, completely black Petruce.  Although most feral cats are skittish around people and avoid them at all costs, Princess was already socialized when I met her.  Granted, it took a while for her to trust me, but we eventually became friends.  She thoroughly enjoys her life outdoors, but is quick to come in for a nap under the hot gallery lights – especially if the day is particularly cold or rainy because she hates getting wet!

She’s usually waiting for me on the porch when I arrive on my bike each morning; if not, when she hears my tread on the wooden floor, she’s quickly by my side, waiting for me to unlock the door.  Once inside, she walks me to the bathroom, where I store the cat food.  We go out onto the porch together, and she waits while I pour three separate piles of food on the floor: one for her, one for Petruce, and one for Grey Kitty, whose real name is Bob.  He’s a big, sturdy grey male.  He was standoffish for the longest time, but with frequent bribes of food, I got him to come closer and closer.  When he finally accepted me, the transformation in his attitude was dramatic: now, he purrs and rolls onto his back for tummy rubs, often delaying his meal for several minutes in favor of some lovin’.

If I neglect to put out water with her food, Princess will give me an hour or so to realize my mistake.  If the water bowl is still empty, she’ll sit at the full-length glass door and stare inside until I notice her.  If you’ve ever been the subject of the intensity of a cat’s stare, you’ll understand why I scramble to see to her needs, all the while apologizing for my deplorable lack of service.

When it’s cold out, she’ll sometimes spend the entire day inside, curled into a tight ball of feline contentment in her round cat bed; on other days, equally as cold, she’ll sleep in a patch of sun among the foliage out front, or occasionally on the still-warm hood of a car. 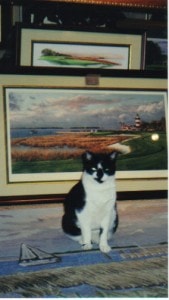 She shows her appreciation for my care with a gift now and then . . . sometimes it’s a mouse, often it’s a lizard.  Dead or alive, the status really doesn’t seem to matter; I suppose it’s the thought that counts.  She once brought a lizard into the gallery and dropped it at my feet.  It quickly sought shelter behind a bookcase and I thought, “Oh, great! Now I’ll have to go on a lizard hunt behind every piece of furniture in here!”  But Princess caught it again and brought it back to me.  I grabbed some cat food from the bathroom and lured her out to the porch.  As I put the food down behind her, she dropped the lizard, turned around, and began eating.  I gingerly picked the lizard up by the tail (it didn’t appear to be injured at all), and flung it into the leaves on the ground.  Princess turned around, looked at the now-empty floor, then up at me as if to say, “Okay…where’s my lizard? I put it down right THERE!”

She has a fan club of loyal followers who return to this area each year.  The first question I hear from them is, “Where’s Princess? Is she still around?”  She loves the attention, and will tolerate petting for . . . oh . . . an hour or so.  She has no problem with most adults, but she disappears whenever a child comes near.

If the day is warm, I’ll eat my lunch outside on the porch, usually with Princess or Petruce by my side.  If I haven’t packed a lunch, one of them will usually meet me as I return to the gallery after getting something at the deli.  The cat will walk by my side, giving a perfect impression of a dog at heel, although a cat would never admit to such a thing.

When I leave at the end of my workday, Princess is usually on the porch and she’ll come over for a quick scratch behind the ears.  I tell her I love her and will see her tomorrow; then she accompanies me down the steps and walks away from the gallery, her workday also at an end.

Editors’s Note:  Today is the one-year anniversary of Princess’ passing.

Bobbi Hahn has lived with her husband and two wonderful cats beside a lagoon on Hilton Head Island, SC for six years. She works as the General Manager of a gift store/art gallery, a job she absolutely loves because she meets people from all over the world, in a breathtakingly beautiful setting. She enjoys biking on the beach, cooking, reading, and fussing over friends and family when they come to visit. Her poetry has been published in several anthologies; her essays have been featured on numerous online websites; her writing and photos are included in Hilton Headings, the second anthology by Island Writers’ Network. For more information, please visit her website: http://www.bobbihahn.com.