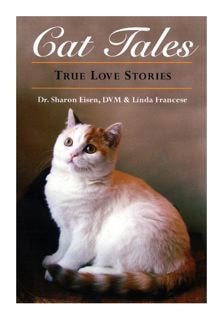 Cat Tales is a heartwarming and inspirational collection of stories about cats that will make you smile, laugh and cry, sometimes all at the same time.  The stories will most certainly bring fond memories of all the cats that have graced your life, and they will make you love and appreciate your current feline companions even more.  These cats that come and go from our lives leave indelible pawprints on our hearts, and the authors have captured many of these special cats in the tales they share in their book.

There’s TiVo, the shy orange cat who tended to avoid human contact, and who broke through an autistic boy’s seemingly impenetrable shell of silence and showed him that it’s not so bad to be a little different, and in the process, taught the boy’s mother to be a little more patient and have a little more faith in the future.  There’s Chloe, the cat who saved her human’s life who was going through cancer treatments.  There’s Bentley, an international winning show cat whose beauty and huge spirit touched everyone he came into contact with and who turned his human from a die-hard dog lover into a cat-loving, cat-fancying addict.  There are many more stories like these, and they all touch the heart.

The book is interspersed with fascinating and entertaining facts about cats, and the photos that accompany each story enhance the tales being told.  Cat Tales celebrates cats in all their wonderful variety and glory, and it illustrates how much these wonderful creatures impact their humans’ lives in often unexpected ways.  A must read and a wonderful gift for any cat lover.

Dr. Sharon Eisen has been a practicing veterinarian since 1984.  In 1991, she realized her dream and opened a feline-only practice in Brookfield, CT.  The Complete Cat Clinic was the very first cat only hospital in the state.  In addition to devoting her career to the care and well-being of cats, Dr. Eisen has an abiding interest in the human-animal connection.  She has conducted programs in elementary schools to teach students about pet care.  She has led pet bereavement groups, and has brought cats and dogs to nursing homes to serve as pet therapists.

Linda Francese is a well-known radio personality for over 20 years, fulfilled a lifelong dream in 2004 and began working with cats as the head technician at the Complete Cat Clinic in Brookfield, CT.  A year later, she joined Dr. Eisen as co-owner of the Plaid Plus Cattery, breeding British Shorthair cats.  Mrs. Francese’s serious interest in the healing powers of the human-animal connection inspired her to co-author this book. 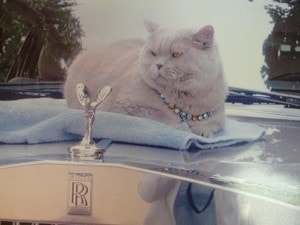 I’m not supposed to like showing cats.  I’m supposed to tend to the needy, the homeless, and the ailing and sick cats of the world.  That’s what my conscience tells me.  But my ego tells me otherwise.  I want to have the most beautiful cat of them all.  My pride wants everyone to ooh and ahh over my cat; the cat that I brought into the world by carefully selecting sire and dam, putting them together to make a most beautiful kitten and then, cat.  I apologize to all the unwanted cats in the world and I swear, I love them too.

So, when Bentley, my most beloved British Shorthair cat won a best in show at the Westchester cat show, I found myself crying and feeling an almost embarrassed joy.  The judge held Bentley way up in the air so everyone could see him.  She turned him sideways, stretched him out and described the attributes that made this lilac colored cat the best cat of the show.  I stood in the crowd with all the others, admiring his beauty, proud and swelling inside, knowing he was mine.  And then, he looked at me with his Cheshire grin and what I saw in his eyes was, “Look mom, we did it!” 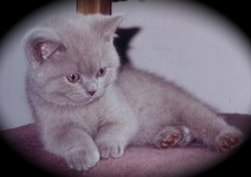 That was in 1999.  Bentley went on to become a supreme grand champion cat, the highest level of achievement in the cat fancy.  He was an international winning cat, appeared in print ads, TV commercials and even had a gig on animal planet.  He loved every second of his life.  He was the only cat I ever knew that posed for the camera.  He delighted being in the limelight and loved attention he received.

When I reflect back on the day that Bentley won Best In Show, I feel what I felt at that moment all over again. Sometimes it makes me cry from both sadness and joy.  That day is a gift, a treasure that I will always have.  Bentley taught me that’s it is okay to enjoy the guilty pleasures of life.

Bentley died at the age of seven, succumbing to hypertrophic cardiomyopathy, a disease I didn’t know he had until he went in to congestive heart failure at the age of two.  He lived five and a half more good years.  And that was his other life lesson to me.  Live in the moment; make memories and love with abandon.

Dr. Sharon Eisen has been a practicing veterinarian since 1984. In 1991 she realized her dream of opening a feline-only practice in Brookfield, Connecticut. The Complete Cat Clinic was the very first cats-only hospital in the state. While owning and operating the clinic, Dr. Eisen has also been breeding cats for the past 15 years.  Some of her cats have appeared on television and have been top-ranking show cats with many ribbons to their credit; and others have simply been beautiful and treasured companions.  In addition to devoting her career to the care and wellbeing of cats, Dr. Eisen has an abiding interest in the human/animal connection. She has conducted programs in elementary schools to teach students about pet care.  She has led pet bereavement groups and she has brought cats and dogs into nursing homes to serve as pet therapists.

For many years, Dr. Eisen has wanted to share the wonderful and compelling storiesof the cats she’s encountered. The time has finally come.  Her book Cat Tales – True Love Stories will take you on a journey of the heart and mind.

Dr. Eisen lives in Danbury, Connecticut with her husband and four cats: Paco, Hershey, and Rosie and Pawlie Newman.

For more information about the book, please visit: http://www.cattalesbook.com