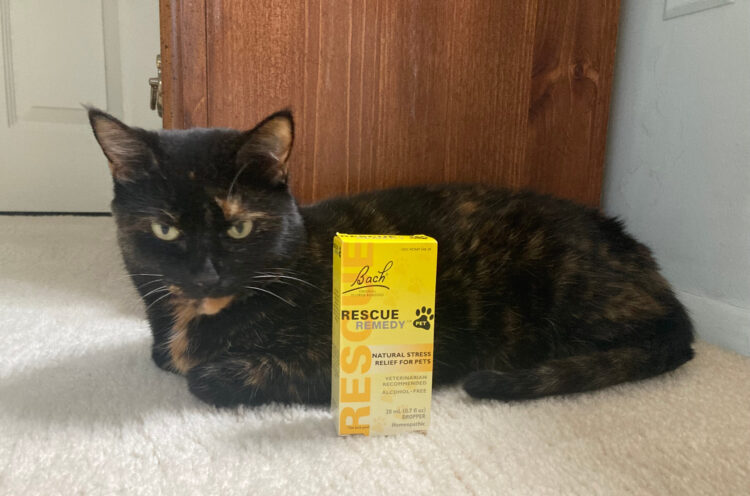 
I’ve always felt that the 4th of July is probably cats’ least favorite holiday. A recent study by Wakefield Research, commissioned by Bach® Rescue Remedy® Pet, a liquid remedy for pets made with natural flower essences, revealed that 54% of current and former pet parents say fireworks are a leading cause of stress for their pets.

None of these findings surprise me. If anything, I think the percentages reported are lower than the actual occurrences. Allegra used to be terrified of fireworks, but as she is getting older, and as we’ve been using various methods to help keep her calm, she’s much better with them. Even Ruby, who was pretty fearless and not afraid of thunderstorms, became unsettled when fireworks started going off in our neighborhood.

Thankfully, there are things you can do to help your cat cope with fireworks and thunderstorms.

If there’s a room in your house where the noise from fireworks is the least noticeable, you may want to designate that as a safe room during the holiday. Put beds, food, water, toys, and cat trees and scratchers in the room. Leave a radio or tv on in the room; this may act as white noise and block out some of noise.

Don’t try to drown out the sound of fireworks by blasting the music. Choose soothing classical music, or calming music especially designed for cats. 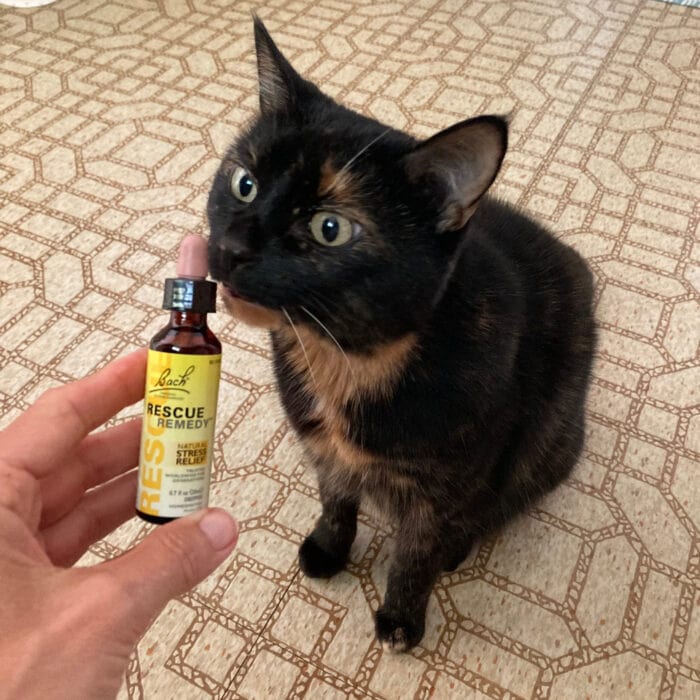 Bach Rescue Remedy® Pet is a liquid remedy made from flower essences. The gentle, healing essences have been used since ancient times to provide vibrational healing for mind, body and spirit for people. Hildegard von Bingen (12th century) and Paracelsus (15th century) both wrote about the use of flowering plants to treat health imbalances. The healing method became better known in the 1930’s when Dr. Edward Bach, a British practitioner of homeopathy and bacteriology, developed his range of 38 essences known as the Bach Flower Remedies. Rescue Remedy®, a blend of five different essences designed to calm and soothe, is probably the most well-known of the remedies.

I’ve used Rescue Remedy® for decades, both for myself and for my cats. And it works!

It can be given in your cat’s water, food, with a treat (the creamy squeezable treats are great for this,) or directly into their mouth. It can also be rubbed into their ears. To help your cat cope with fireworks, start administering the remedy a few days before the 4th (or sooner, if your neighborhood is like mine and fireworks start going off at least a week before the holiday.) For thunderstorms, don’t wait until the storm is moving in. If storms are in the forecast, start giving the remedy early in the day.

Our cats pick up on our emotions, and if we’re anxious, they’ll be anxious as well. Even though some experts claim that trying to comfort your cat when she’s scared will reward and reinforce her fear, I adamantly disagree with that advice. It is nonsense to believe that reassuring your cat that everything is fine is going to make her associate fear with being rewarded with your attention. Let your cat be your guide: some cats will do better if you’re right there with them, others will prefer to be left alone in their hiding place.

If your cat has reacted very badly to fireworks or thunderstorms in the past, you may want to talk to you veterinarian about prescribing anti-anxiety medication.

How do your cats react to fireworks and thunderstorms? What do you do to help them cope?