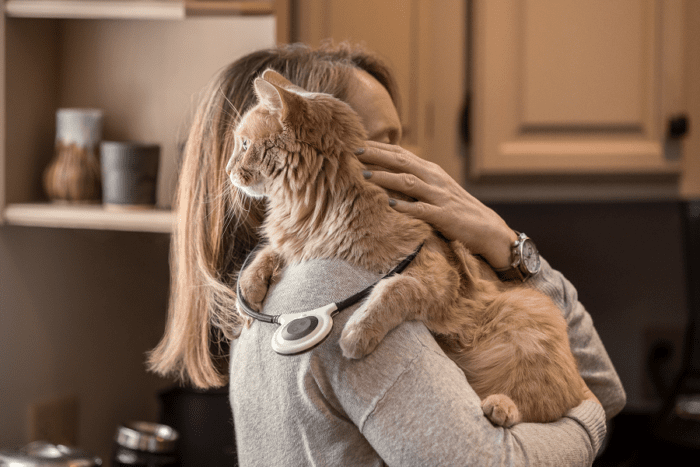 Stomatitis is a frustrating and painful condition, a severe inflammation of the oral cavity in cats in which the affected cat essentially becomes allergic to her own teeth. The outward signs of this condition are red, inflamed, and often ulcerated gums, and this can be very painful for the cat. The exact cause of stomatitis is not known. The most commonly held theory is that stomatitis is caused by an abnormal reaction of the immune system. Some cats appear to be hypersensitive to their own plaque, and even small amounts will cause the immune system to mount an exxagerated inflammatory response by sending lymphocytic and plasma cells into the cats’ gums and oral tissues. For this reason, the condition is also referred to as lymphocytic plasmacytic gingivitis stomatitis.

11-year-old Charlie was treated at Veterinary Medical Center of Long Island for severe stomatitis.  For almost two years, he was medically managed with a combination of steroids, cyclosporine, narcotic pain medicine, and chlorambucil. All of these treatments only marginally controlled his inflammation, and he continued to experience pain and even developed transient diabetes from the steroids. Poor Charlie was miserable.

Dramatic improvements with the Assisi Loop

Charlie’s humans began treating him with the Assisi Loop with four daily treatments, each lasting 15 minutes. Over the next eight months, Charlie’s condition improved dramatically.

Charlie’s humans were able to reduce the amount of steroids he needs, and discontinue his pain medication.

For a detailed timeline of Charlie’s case and treatment progression, and photos of his dramatic recovery, please visit The Assisi Animal Health Blog.

5 Comments on Case Study: How the Assisi Loop Helped Charlie with a Severe Case of Stomatitis