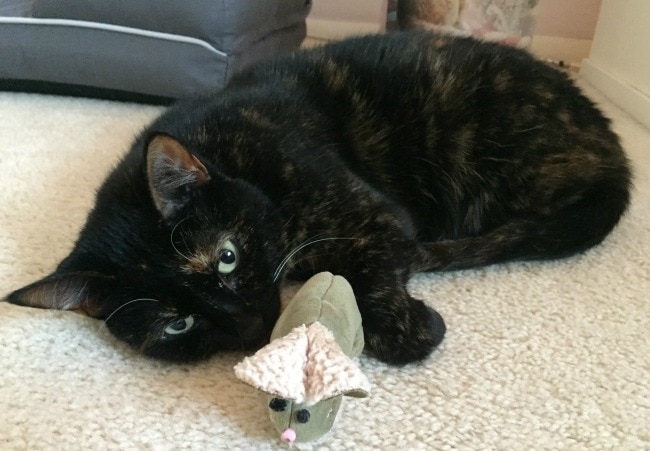 Hi everyone, it’s Allegra. Today, I want to tell you about my special toy.

It’s nothing fancy. It’s a green suede mouse that used to have a tail, but it hasn’t had one for a very long time. It probably also had whiskers at some point, but since Mom usually removes those from any toys she gives me, it’s impossible to know for sure.

The toy has been in our house for a very long time. Mom says it was given to her by a friend, along with a second one of a different color, when she adopted Ruby, so that means it’s been here for nine years! The brown toy disappeared many many years ago and has yet to be found.

I LOVE this toy! I pick it up and carry it around the house, chirping and singing and yowling. Sometimes, I even bring it to Mom when she’s already asleep in bed. I think Mom knows that that’s very special, because I don’t do it with any other toy.

I never play with this toy, it’s not meant for that. Mom, being the amazing cat mom that she is, knows this, and has always instructed our cat sitter to not ever use the toy to play with me.

Ruby also knew to never touch that toy. I didn’t even have to tell her, she just knew it was off limits.

So when the toy disappeared a couple of weeks ago, I was pretty upset. I tried to tell Mom, but even though she’s usually very in tune with me, she was slow on picking up on my increasingly anxious communications with her to let her know that THIS WAS AN EMERGENCY! Finally, one Sunday morning, she watched me go up and down the stairs, unable to settle down, because, well, MY TOY WAS MISSING! Finally, she caught on and realized that she hadn’t seen the toy in several days.

She immediately started looking. She looked under every piece of furniture. I helped her look as best as I could. After several minutes, she stopped and looked at me. “Allegra, I can’t find it. I’m so sorry. I don’t know where else to look.”

I couldn’t believe it. Mom knows everything.  How could she not know where my toy was? Then, all of a sudden, I heard her say “Oh! Maybe…” and she ran into the bedroom. She had made the bed earlier in the day, but she completely unmade it again, looking under the pillows and the comforter. No toy. She started to leave the bedroom, and then she turned around. She had already looked under the bed, and didn’t see the toy. But now, she looked between the headboard and the mattress – and sure enough, the toy had somehow fallen into the crack, and gotten stuck halfway down.

I can’t tell you how happy I was when she pulled it out! My toy was back! My Mom is the best!

A note from Ingrid: I don’t know what made me look in that particular spot, but something or someone (maybe Ruby?) guided me to it. I’m guessing that either Allegra dropped the toy down the crack when she brought it up on the bed one night, or it got flung down there when I threw the covers back after she brought the toy on the bed. Either way, I now make sure that the mattress is pushed back all the way against the headboard so there’s no way this can happen again.

A few more words about this special toy

The first time I heard Allegra with that toy, I thought she’d hurt herself, her cries sound so plaintive sometimes when she has it in her mouth. As soon as I look for her when she does carries the toy around, she drops it and stops vocalizing, which is why I’ve never been able to get a video of her with the toy.

Amber had her own version of this special toy: a green and tan fuzzy mouse that I got for her when she first came to live with me. For the entire ten years that she was with me, that mouse was her special “baby.” Like Allegra, she’d pick it up, carry it around the house, crying and yowling.

It was always interesting to me that none of the other cats would touch those special toys. Ruby considered every other toy in our house hers – but yet, she never once played with Allegra’s mouse. This was also the case with Amber’s green and tan mouse. Even though Buckley was already a senior when she came to live with us, she still liked to play, but she never once touched Amber’s special toy. When Allegra joined Amber and me as a 7-month-old kitten who would go after anything that moved, she never once played with Amber’s special mouse.

So what is going on here?

There are a couple of theories as to why some cats do this. One is that it has to do with a cat’s maternal instinct, and that it mimics what they would sound like when they carry their kittens. Some say that this happens especially in cats that never had a litter. While that might be true for Allegra, Amber blows that theory out of the water, because she had a litter of kittens when she was rescued. I’ve also heard of male cats doing the same thing.

The other theory is that this has to with the cat’s hunting instinct and that it is a way of announcing that they caught their prey, along the lines of “see what a great hunter I am!” That theory doesn’t really make sense to me, either, because I think that if that were the case, they wouldn’t be so secretive about it and just drop the toy when they see me looking at them. It seems like they would continue to bring the toy to me, waiting for some sort of praise.

Do your cats have a special toy? Share your stories!

27 Comments on Allegra and the Search for the Missing Toy