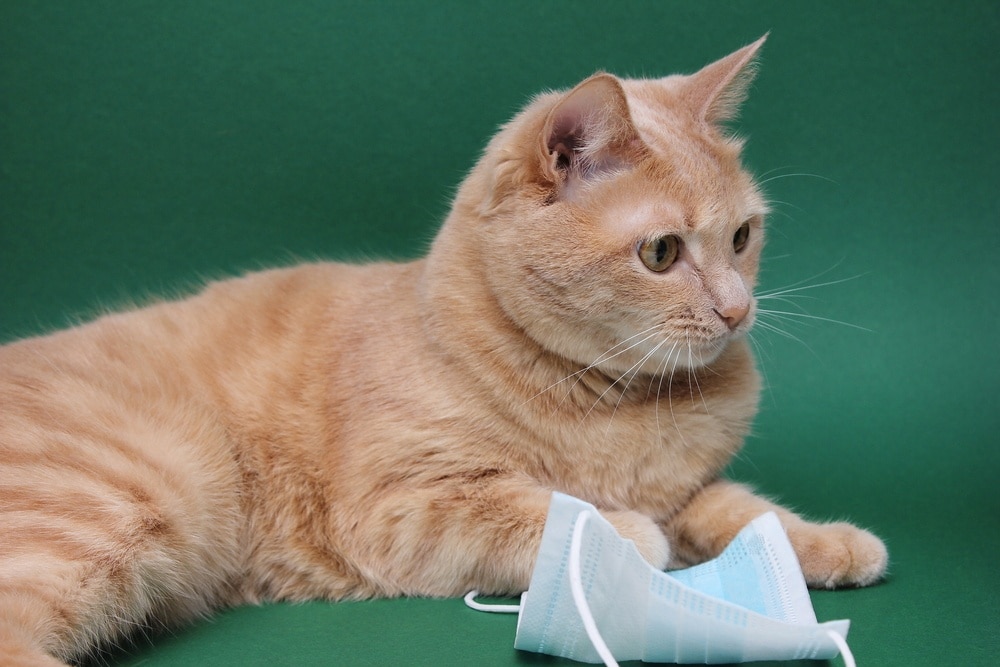 This past week has been a firestorm for cat parents. First we learned that cats can be infected with a large dose of live SARS-CoV-2 virus, the virus that causes COVID-19, and may be able to transmit the virus to another cat. The next day we hear that even some shelter cats, assumed feral, had neutralizing antibodies against SARS-CoV-2. Then, the icing on the cake, a tiger tested positive for COVID-19 in the Bronx Zoo. But not all the news is discouraging; the latest study from France is demonstrating just how hard it may be to infect your pets¹.

This article is aimed at cutting through the confusion, offering a science-based explanation, and hopefully putting your mind at ease at least a little.

“There is clear evidence that cats are susceptible to the virus, but no evidence of clinical disease in humans from exposure to cats,” states Dr. Susan VandeWoude, DVM, and Professor of Comparative Medicine at Colorado State University.

Infected by the virus is not the same as virally infectious

This is an important and critical distinction.

This is a summary of the current state of information about cats and COVID-19. We are left with many open-ended questions that only careful science can answer. It is safe to assume that we will be learning more in the upcoming days, weeks and months.

Science Magazine, the leading scientific journal worldwide, has chosen to publish what I described last week as a seriously flawed study originally published on Biorxiv, an open source platform for researchers to put up early and tentative results. I am not alone in questioning the reasoning behind this decision.

Washington State University Public Information Officer Charlie Powell states that “the original intent for the pre-print server BioRxiv was for rapid communication between scientists on preliminary studies. However, more and more, this platform has become a dubious instrument for the media.”

In that now widely read study, cats were infected with an overwhelming virus dose, directly into what is known as the infectious hot spot, deep inside the nose. The transmission of the virus from one cat to another can also be questioned, since no details on housing and cage cleaning were outlined in the paper’s methods. While the results are troubling, the fact is that cats can be infected by numerous other coronaviruses. More importantly, no adult cat became visibly ill during the study. I repeat, infected is not the same as infectious.

When animals or humans are exposed to a pathogen, the immune system mounts defensive counter-attacks. In the case of viruses, specialized cells gear up and use small pieces of the invading virus to create the proteins we call antibodies that bind specifically to these small pieces. Once bound to the viral pieces, these antibodies can tag viruses for destruction or block the virus from attaching to another cell. These blocking proteins are called neutralizing antibodies, which is what was found in 15 out of 102 cat serum samples in another BioRxiv study.

Breaking this study down, the three highest antibody measurements, called titers, were from known COVID-19 households. Two of the stray shelter cats also tested with higher titers, but much lower than the cats from positive households. These cats may represent abandoned pets left to fend for themselves when people were evacuated to hospitals, but that is unknown. All other positive animals had levels of antibody barely above the detectable range of the assay. Therefore, in reality less than 10% of the random samples had potential exposures to live virus.

In this case, the testing methods used were sound. “These researchers did a thorough job in this study,” explains Dr. VandeWoude. “This is the same assay that would be used for humans.” As part of the validation of their test, the authors made sure that only SARS-CoV-2 antibodies and not common feline coronaviruses, like the one responsible for FIP, were detected.

What is interesting about this study is not that these animals had circulating antibodies, but the suggestion that they could have mounted this type of response from small daily environmental exposures and built up immunity over time. Doing a careful and controlled study of sub-clinical aerosolizing virus doses over several days, as would occur in real life COVID-19 patient households, and then tracking the development of neutralizing antibodies in cats would be extremely helpful information not just for cats, but also for human medicine as we race to develop vaccines.

A study coming out of France should help us all take a deep breath. The Institut Pasteur in Paris used veterinary student volunteers and their pets as test subjects for detection of viral transmission. A cohort of willing and knowledgeable people, who can track pet symptoms during their own disease, is a big advantage over previous studies. They followed 20 households, 2 of which were confirmed COVID-19 cases and 11 others who presented with clear COVID-19 symptoms. From that pool, the authors screened 9 cats and 12 dogs using both types of diagnostic tests, a PCR based test for nasal and rectal swabs and a blood test looking for neutralizing antibodies. None of the animals tested positive.

According to the University of Illinois College of Veterinary Medicine web site, the Bronx Zoo contacted them about ill big cats on April 1. Out of an abundance of caution, since general anesthesia is required to obtain a sample from a tiger, only one of the large cats, a Malayan tiger, was swabbed for testing. Duplicate samples were sent to the University of Illinois and to Cornell University for testing. As we know, these samples were positive for viral RNA, as reported by the USDA. So far, there have been no more additional tests reported on these cats, such as testing for live virus or blood serology. All cats are recovering without incidence.

Could our house cats be as easily infected as their wild big cousins? Quoting the University of Illinois press release, “there are a lot more domestic cats that have been exposed to the virus than tigers, so finding it first in a tiger might suggest differences in susceptibility among these cat species,” says Dr. Karen Terio, Chief of Zoological Pathology Program. “This is not unprecedented, as other viral infections can cause severe and even fatal disease in wild or big cats but not affect domestic cats. We have to remember that they are different species. There are still a lot of unknowns.”

What about testing companion animals for COVID-19?

As of April 6, the USDA is not recommending routine testing of pets, but cautions this is an evolving situation.

Within the past few weeks, two animal-specific COVID-19 tests have been validated and are awaiting commercialization if the USDA believes this information becomes relevant. IDEXX Reference Laboratories, a leader in veterinary diagnostics, stands ready to release their validated RealPCR Test. From their initial studies of thousands of samples worldwide and from multiple species, they have found no positive cases. Like the USDA, IDEXX cautions that cat owners should consult with their vets for testing for other common known respiratory viruses before suspecting COVID-19.

The second test was recently released by the Washington State University associated Washington Animal Disease Diagnostic Laboratory (WADDL) in response to the initial outbreak in the Seattle suburb of Kirkland, Washington. “This test is not very different than the currently available human tests,” says Charlie Powell. “It is PCR based, specific for viral RNA and has a two hour turnaround time, but it is only for animal use, not humans. Also, it is qualitative not quantitative. This is an important distinction.” This means that the test cannot tell us how much virus there may be in any particular sample, just that nucleic acid (RNA) for the virus exists.

Will COVID-19 testing of pets ever be needed?

So, we are ready if and when testing household pets becomes necessary. To investigate whether we are seeing potential cases of feline COVID-19 in our communities, I contacted the Chief Medical Officer of the San Diego Humane Society and VP of Shelter Medicine, Dr. Zarah Hedge, DVM, MPH, DACVPM, DABVP (Shelter Medicine), about an increase of respiratory symptoms in their current feline intakes. Although they are limiting animals at this time, she hasn’t seen “an unexplainable bump” among the shelter’s cats. The shelter is carefully monitoring the situation and has contingency plans in place for cats coming from COVID-19 households, including strict 14 day segregation and use of dual compartment low stress cages that help prevent accidental viral spread during cleanings.

Don’t panic. Don’t abandon your cats. Enjoy the purrs and support they give you.

Dr. Hedge believes that animal advocacy groups have done a good job in alerting the public about a lack of evidence for pet to people disease transmission. When asked about pet dumping in response to the latest highly sensationalized news, she states, “I suspect this won’t happen due to the push of information out to the community.” In fact, just the opposite reaction has occurred, at least in the greater San Diego area. “Almost 60% of our shelter animals are out in community fostering right now. People have really stepped up in our time of crisis.” She adds, “I hope your readers will help spread the correct information, so others will not try and surrender their pets to local shelters out of fear of COVID-19.”

As we navigate this unusual point in time, we need science and medicine more than ever to protect our pets and ourselves. Use common sense. Isolate yourself as needed and avoid direct nose-to-nose contact with your cat if you suspect you are sick.

Ingrid R. Niesman MS PhD is the Director of the SDSU Electron Microscope Imaging Facility at San Diego State University. She graduated from Utah State University and received her MS from the University of Illinois-Urbana-Champaign. After 30 years of technical electron microscopy, cell biology, neuroscience and infectious disease research, Dr. Niesman completed her PhD in the UK at the University of Sunderland. Her work experience includes time at LSU Medical School, Washington University, UAMS in Little Rock, UCSD, TSRI and a postdoctoral year at CALIBR in La Jolla, CA. She has worked for at least two National Academy of Science members and is credited with over 50 publications. She can be reached at ingridniesman@yahoo.com