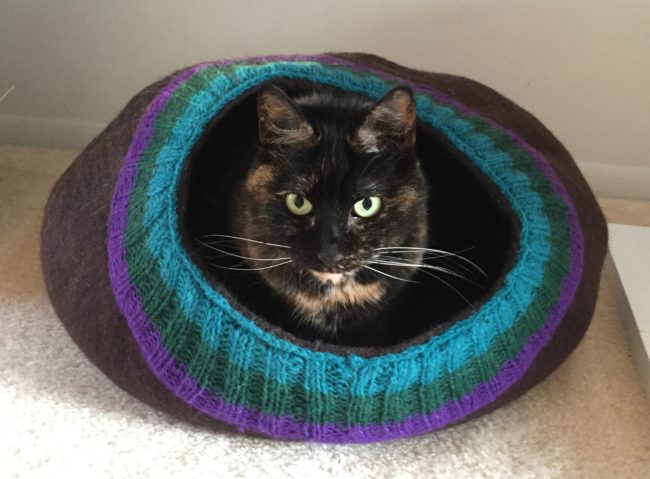 When I announced Ruby’s passing in December, I promised you that I would eventually write about my experience during the last four months of her life, from diagnosis to caring for her through her illness, to having to let her go.

I decided to title this four-part series “Ruby’s Last Journey.” My own journey through grief, which is, of course, a large part of all of this, is ongoing. I suspect I will inhabit planet grief for quite some time as I try to move forward without my little girl. Life goes on, but the pain of missing her hasn’t really softened all that much over the last two months.

Writing this series was hard. In the past, writing about losses helped me heal. That doesn’t seem to be the case this time. I know in time, I’ll come to terms with this loss, like I have with all my other losses. The reality is that we never get “over” a loss, nor should we want to. Loss changes us. The best we can hope for is that in the end, it changes us for the better.

The series will run in four parts on consecutive Wednesdays. In this first part, I’ll address her symptoms, her diagnosis, and how I made my treatment decisions for her. In part two, Practical Considerations of Hospice Care, I’ll address all aspects of caring for her, including nutrition, comfort, litter box issues, appearance, holistic treatments, and more. In part three, Water, Water, Everywhere! Hydration for Cats With Kidney Disease, I address why hydration is critical for cats with kidney disease, and how I handled that with Ruby. And finally, in part four, The Long Good Goodbye, I share my own journey from denial to acceptance, and how I made every moment I had with Ruby count.

Allegra and Ruby had their annual checkup in late August of last year. Everything looked good. Then, starting the beginning of September, Ruby’s appetite started to drop off. Since this had been a previous occasional pattern with her, I chalked it up to “fussy eating,” even though I could hear my veterinarian’s voice in my head from when I had mentioned Ruby’s finickiness in the past. “There’s no such thing as a fussy eater,” says Dr. Andrea Tasi, a holistic veterinarian and owner of Just Cats, Naturally. “A healthy cat will eat her food with relish. There’s always a reason when a cat becomes finicky.” Ruby was eating, she just wasn’t finishing her meals.

Toward the end of September, I noticed her drinking more water. Before that, I’d rarely seen Ruby drink from the bowl. The girls both eat raw and the occasional canned food, and I mix additional water in with their meals, so she was getting plenty of moisture from her meals. Now, apparently, that wasn’t enough. Something had changed.

The moment that changed everything

It was time for Dr. Tasi to take another look at Ruby. And that’s when my world started to fall apart.

While Dr. Tasi gently palpated Ruby’s kidneys, I petted her and told her what a good girl she was. Suddenly, Dr. Tasi stopped what she was doing. I looked up from kissing Ruby’s head. When I saw the look on Dr. Tasi’s face, I knew something was very wrong. I realized right then that our lives were about to change drastically.

One of Ruby’s kidneys was enlarged. The most likely causes for an enlarged kidney are a benign cyst, an infection, inflammation, or cancer.

Dr. Tasi and I talked about next steps as I was trying to wrap my mind around the idea that Ruby was really sick. I think I was in shock, because I was very matter of fact about discussing the various possibilities. It wasn’t until after Dr. Tasi left that I started to cry.

We would start with running bloodwork to assess Ruby’s kidney function.

My heart felt like it was shattering into a million pieces when Dr. Tasi called with the bloodwork results the next day. Given Ruby’s symptoms, we expected to see increased kidney values, but we didn’t expect them to be as elevated as they were. Ruby’s kidney values were so high, it was surprising to Dr. Tasi that she was even alive, let alone doing as well as she was.

I thought I had prepared myself for bad news, but while listening to Dr. Tasi, I broke down in tears.

Conventional treatment for kidney failure typically starts with rehydration via IV fluids, which would require hospitalization for at least two or three days. And while this might have been right for another cat, I knew in my heart that it wouldn’t have been right for Ruby.

The only way to know for sure what was really going on with Ruby’s kidneys would be an ultrasound. I chose to decline, with the full support of Dr. Tasi.

I previously wrote about the topic of diagnostic testing, and how one of the most important questions to ask yourself before agreeing to any test is “what will you do with the information from the test?”  In Ruby’s case, that meant: if the ultrasound showed a growth or cyst on her kidney, it would most likely have required surgical removal. If it looked like cancer, it would have meant getting a biopsy, possibly followed by surgery and/or chemotherapy. And while surgery and chemo might have been right for another cat, I knew in my heart that they were not right for Ruby.

Treat the patient, not the lab findings.

I am blessed that in Dr. Tasi, I have a vet who treats the patient, not the lab values. She is also one of my closest friends, so she not only knew Ruby, she also knows me really well. She understood the unique bond between me and Ruby. We share the same philosophy when it comes to treating cats: just because veterinary medicine has advanced to the point where you can treat pretty much anything, that doesn’t necessarily mean that a particular treatment is the right choice for every cat. Having my veterinarian support my decision to forego aggressive diagnostics and treatment made the unbearable bearable.

43 Comments on Ruby’s Last Journey: The Moment That Changed Everything