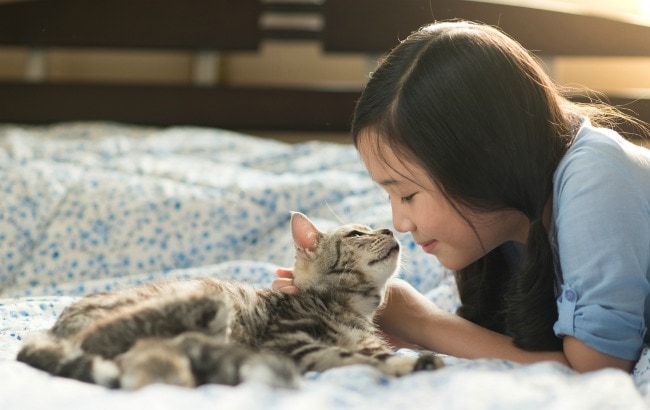 This is the second installment in a three part series reporting from the 2019 Winn Feline Foundation Symposium on FIP. Click here to read Part One: The Viral Menace.

Some of the world’s deadliest pandemics are the result of viral infections. Polio was conquered by a vaccine in 1955. HIV infections are now treatable thanks to antiviral cocktails. FIP can now be considered treatable, using novel antiviral therapies presented at the Winn Feline Foundation FIP Symposium. With the facts clearly laid out in Dr. Niels Pedersen’s presentation, there is a very effective drug to use on FIP-infected cats. Unfortunately, the commercialization has been waylaid.

FIP can now be considered treatable. … There is a very effective drug to use on FIP-infected cats.

A personal story of FIP

Judith (not her real name) was a symposium attendee, one of the many audience members who had experienced the consequences of an FIPV infection firsthand. She had rescued her neutered male as a day-old singleton from a shelter, and bottle raised him to a healthy, active kitten.

Late last spring, she noticed him lying down in awkward poses. He had slowed down. He had lost weight despite eating normally. After an initial vet visit, where blood was drawn and potential dental issues explored, an ultrasound revealed a large pocket of abdominal fluid, which was hampering his ability to lay down comfortably. The drained fluid was dark and ominous. Further PCR analysis (a test to detect the genetic material of a virus) was inconclusive. The kitten tested positive for FECV (feline enteric corona virus,) but FIPV resulted in mixed results.

One vet suggested that this was clearly FIP and recommended euthanasia.  Determined not to give up on her beloved friend, Judith reached out to another vet, who suggested she begin researching options on social media, which led her to UC-Davis and Kansas State University.

The Saturday afternoon session at the Winn Feline Symposium was dedicated to possible treatment options for client cats.

This disease grows slowly in the acute phase, as occurred with Judith’s cat, with symptoms that are easily dismissed. As the immune system switches into hyperdrive in one sense, it shuts down another part. A cat’s ability to fight invaders is actually suppressed when the white blood cells that are supposed to kill infected macrophages are told to ignore their instructions, allowing unfettered propagation of the virus. Thus, immune-system stimulants like Polyprenyl ImmunostimulantTM (PI) have effectiveness in cats with the “dry” form of FIP. Feline interferon-omega, a suggested treatment, seems ineffective. The yet-to-be-field-tested properties of the FDA-approved antifungal drug itraconazole are a shot in the dark, but shows promising results in the lab.

With most cats succumbing to this disease in a matter of days or weeks, the race for a truly effective antiviral or combination of antivirals cannot be a marathon.

The two most-promising compounds are mired in FDA regulatory quicksand. This is where the story becomes personal.

Having worked in and around drug development, I fully appreciate the efforts of teams of biologists, chemists and clinicians to bring new drugs to life. It’s a long and expensive road with no guarantees at the end. Pharmaceutical companies prioritize profit when making decisions about future therapeutic areas and therefore devote far more resources to human than animal disease. While that approach is understandable as a business decision, it may be discounting the growing attitude among pet parents that they will pay whatever is necessary to treat their pets.

Of the new drugs, GC376 has a difficult regulatory path towards FDA approval. Originally discovered to fight FIPV, it was developed by veterinary scientists for veterinary use. But the original 2018 small-scale field study was less than encouraging; out of an initial 20 FIPV-positive cats, only seven remained disease free for up to 14 months, a dismal 30 percent “cure” rate.

A more promising candidate is GS-441524, a synthetic intermediary in the chemical manufacturing of another antiviral being developed to fight Ebola. GS-441524 is highly effective in treating FIP. Out of 31 cats recruited for an initial study, four were immediately euthanized and one died early on. However, after 12 weeks of treatment, 18 cats were essentially disease-free. Relapses were treated at higher doses. By the study’s end, 25 cats had survived. These are remarkable numbers, which offer hope for afflicted animals and their humans.

But there is an obstacle to approval, and it involves the FDA and people with Ebola. The FDA has separate tracks for approvals of human and animal medicines. But, in rare instances, they allow intersection of the two when adverse events crop up, equating human and cats metabolically. This is why GS-441524 is stopped. One cat outlier could derail or lengthen the approval process for a related human drug. Delays mean money is lost, even if the final outcome is approval. So, the drug is not currently in the approval process for felines.

Which brings us back to Judith. Increasingly desperate, she eventually turned to the black market. While GS-441524 is patented in the US, its chemical synthesis and structure are widely available, which has made the drug attractive to medical chemists who can illicitly manufacture it. And that is where we are today – with a thriving underground in black-market kitty drugs.

Judith was reluctant to trust the black-market drugs at first. “The vial was unlabeled,” she told me, “with no dosage included and no directions. Was I giving my guy something to save him or kill him?” But she purchased a 12-week supply. Within the first two daily injections, the once-lethargic cat was diving under a nightstand to retrieve a favorite toy. “I think it’s shameful that they are hesitant to allow this drug to be developed for cats,” Judith says now.

Getting the drug approved for felines will be challenging. Only a few segments of the government recognize that humans and animals share common health concerns and the FDA is not one of them. Meanwhile, people like Judith and the audience at the Winn Feline Foundation Symposium are moving outside of the regulated-drug realm to seek cures.

Judith’s experience raises pressing questions about whether the primary mission of the National Institute of Health should be expanded to include companion animals. We share not only our lives with our pets, after all, but also our health issues. Alternatively, a separate institute could be funded for animal-drug discovery, or animal-drug discovery could conveniently be folded into funding for the National Center for Advancing Translational Sciences. That center’s acronym, after all, is NCATS.

Without a definitive clinical test for early detection and with limited treatment options once the disease manifests, can we prevent kittens from dying from FIP by preventing early FECV exposure instead? Part Three n this series will present novel research, newly developed products and community action to limit the spread of the virus in crowded cat groups.

2 Comments on A Report from the Winn Feline Foundation Symposium on FIP, Part Two: The Cats and Their Humans Who Fight This Battle