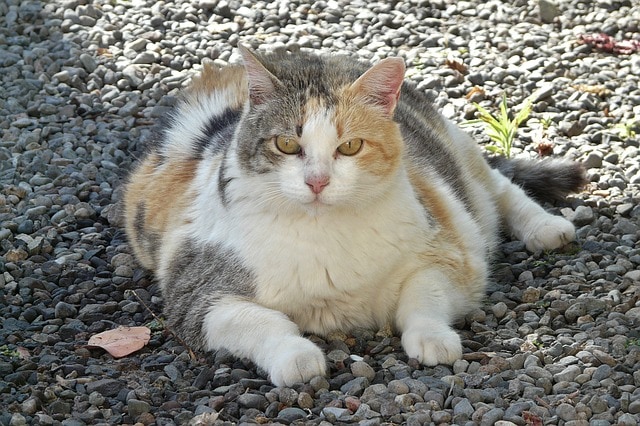 Researchers at the University of Guelph’s  Ontario Veterinary College conducted a 35-year study on more than 19 million cats from the US and Canada. The study confirmed a disturbing trend: most cats gain weight as they age, and cats’ average weight is on the rise.

The largest study of its kind

The researchers analyzed 54 million weight measurements taken at veterinary clinics between 1981 and 2016 to determine a typical weight gain and loss pattern over the course of a cat’s life. The results may not be all that surprising: cats are getting heavier.

According to the study results, male cats tended to reach higher weights than females. Spayed or neutered cats tended to be heavier than unaltered cats. Among the four most common purebred breeds (Siamese, Persian, Himalayan and Maine Coon), the mean weight peaked between six and 10 years of age. Among common domestic cats, it peaked at eight years.

The study’s lead author, Adam Campigotto, told CBC that some possible, but untesteted explanations for the increase in feline weight might be the increased number of indoor cats, changes in cat guardians’ feeding behavior, and improvements in the palatability of cat food.

The study is meant to be a starting point for further research and did not look at what caused the changes in weight, nor did it establish what a healthy weight is, said Campigotto.

One of the next steps for the researchers will be to look at how to manage cats’ weight.

Feline obesity has been on the rise for quite some time now – an alarming trend that mimics the same trend in human medicine. And overweight cats are prone to the same diseases as overweight humans:

It is up to cat parents to prevent cats from becoming overweight. Cats rely on us to provide food, which means they rely on us to make appropriate nutritional choices for them and feed them appropriately sized portions.Because food is so often associated with love, we are, quite literally, killing our cats with kindness. Dr. Elizabeth Colleran, a feline veterinarian and owner of two cat practices, has found that “the closer the relationship a guardian has with his or her cats, the more likely a cat is to be obese.”

For more on how to help your cat maintain or reach a healthy weight, read Feline Obesity Continues to Rise in the US.

For more about the study, visit the UG Ontario Veterinary College website.

4 Comments on Study Shows That Cats Are Getting Heavier