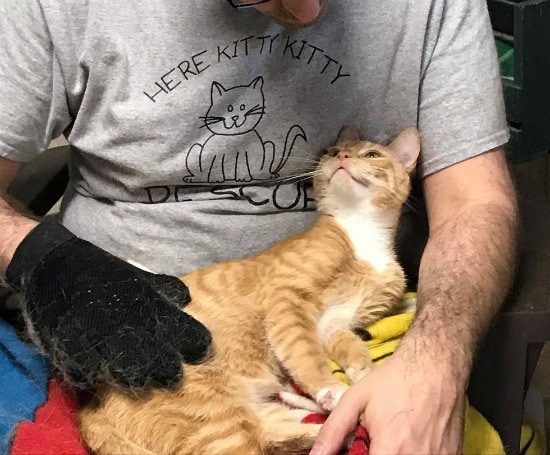 When one-year-old Marmalade was brought to an Indiana shelter along with his siblings because his family could no longer care for him, he was scared and stopped eating. Shelter staff knew they needed to find a home environment for him, and reached out to Here Kitty Rescue. Marmalade was nervous at first in the large barn that serves as a sanctuary where the cats can roam freely, but eventually came out of his shell. But it wasn’t until Rick, one of the volunteers at the sanctuary, started working with Marmalade that he became a happy kitty again. For more about this beautiful rescue story, and wonderful photos of Rick and Marmalade, please visit LoveMeow.com.

If you missed any of the stories featured on the Conscious Cat this week, here’s a recap: on Monday, Dr. Lynn Bahr answered reader questions, on Tuesday, we featured a wall-mounted lounging set, on Wednesday, Ruby told you about the mayhem she caused when we had a dinner guest, on Thursday, we introduced you to Triple T Studio’s brand new Cat Snap Cardigan, and on Friday, we reviewed Gwen Cooper’s short story Fanny Trouble.

The kitty in today’s video cracked me up. Make sure you have the sound on. Apparently, birdwatching is exhausting!

2 Comments on Mews and Nips: Cat Finds Love from Volunteer