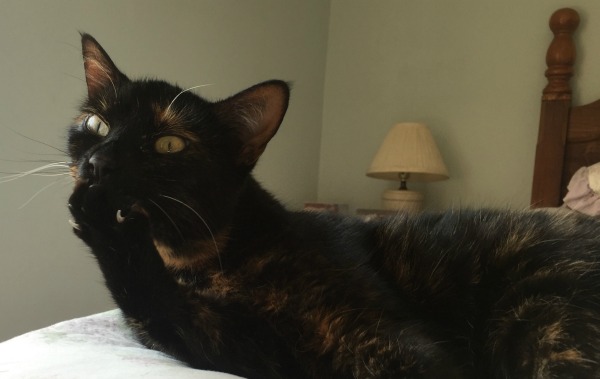 Hi everyone, it’s Allegra! Mom has had so much good stuff to share with you lately, it’s been tough to get some time for me to write one of my columns! Today, I want to talk to you about the importance of grooming.

You all know that we kitties are pretty much self-cleaning. Mom says we’re fastidious about keeping ourselves clean. I don’t know what that word means, but I do know that any self-respecting cat will make sure that she’s clean at all times. In fact, if your kitty ever stops grooming himself, it may be a sign that there’s something wrong.

I love grooming myself. Like all cats, I always wash thoroughly after each meal. But I also groom myself before settling in for a nice long nap. After all, she who is clean sleeps well – or something like that.

Sometimes, we might need a little extra help from our humans to deal with all our loose hair. As you can see in the video below, I love it when Mom brushes me. I especially love to rub the sides of my face against the brush. Mom uses an old slicker brush that she’s used on all her cats, ever since she had her first cat Feebee. She says there wasn’t much of a choice in brushes back then, and every cat she’s ever had has liked that old brush, so she never bothered to replace it.

I want to be very clear on one thing: healthy cats don’t need baths! Well, unless we get ourselves into some sort of trouble. Mom says that when Feebee was little, she painted the bedroom walls, and he got into the paint can with his paws, so she had to wash his feet. She says he wasn’t amused. But unless cats have some sort of health condition that requires a bath, bathing just isn’t necessary. 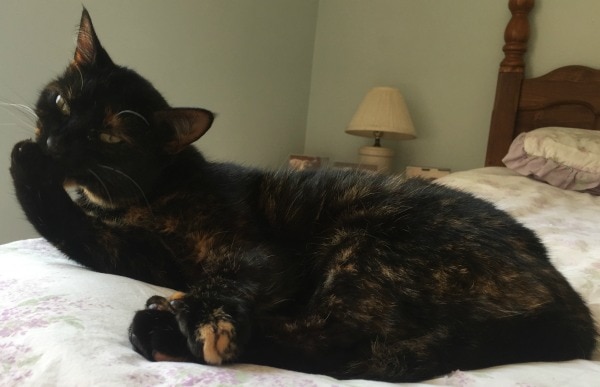 Some cats groom each other. Ruby and I don’t do that. I sometimes get a little lick in when Ruby is sleeping: I sneak up on her and lick her head, but as soon as she wakes up, she gives me that look that I know means “back off,” so I stop. Since Ruby doesn’t like it when I groom her, I sometimes groom Mom instead. I love licking her skin, especially after she’s just put lotion on it. She won’t let me do it for very long, even though she uses cosmetics with no harmful chemicals in them. She says it’s not good for me to ingest too much of that stuff.

What’s that, Ruby? You want to write something, too? Wait your turn, little one – this is my column!

12 Comments on Allegra’s World: The Importance of Grooming