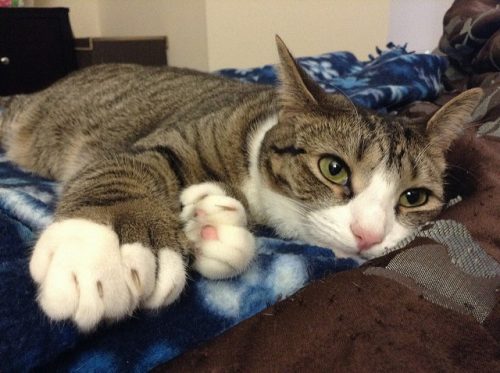 Cats have a total of 18 toes: five on each front paw, and four on each back paw. But some cats boast extra toes, usually on their front paws. These cats are called “polydactyl.” The word polydactyl has a greek root, “poly” meaning multi, and “dactyl” meaning “digit” or “toe.” Polydactyly, as this condition is called, is most commonly found on the front paws only, it is rare for a cat to have polydactyl hind paws only, and polydactyly of all four paws is even less common.

Polydactyly is a a congenital physical anomaly. A genetic mutation causes the cat to be born with more than the usual number of toes on one or more of its paws. If one parent is polydactyl and one parent has normal feet, then 40 to 50 percent of the kittens will also be polydactyl.The condition is not specific to any one breed.

The extra toes can show up in any position. Some polydactyl cats present with their first digit being so large that it looks like a thumb, which is known as thumb polydactyly.

The most famous polydactyl cats in the world are the cats living at Hemingway House in Key West, Florida. The story has it that a ship captain gave the writer a white six-toed cat named Snowball. Hemingway became obsessed with these beautiful cats. At Hemingway’s island home off Key West, FL, he collected more than 50 cats, almost half of whom had extra toes. After his death in 1961, his home was turned into a museum, where about 50 descendants of Snowball live to this day. Thanks to Hemingway’s fascination with these cats, polydactyls are frequently called “Hemingway cats.”

Polydactyl cats were considered to bring good luck by sailors. Sailors revered them for their mousing skills, and the extra toes were said to help them to better balance on rough seas.

The world record for the most toes on a cat is 28. Jake, a Canadian orange tabby, has seven toes on each of his four paws.

President Theodore Roosevelt’s cat Slippers was the first polydactyl cat to live in the White House.

Polydactyly is not unique to any one breed. Cats of all breeds and colors can have this genetic mutation, although at one time, Maine Coon cats had a high incidence of the condition: as many as 40 percent of all Maine Coons had extra toes. Though the trait is no longer as predominant in the breed, Maine Coon polydactyls are still recognized as an official breed by many cat fanciers.

All cats are special, and even though polydactyly is relatively common in cats, if you ask a guardian of a polydactyl cat, they will probably tell you that their multi-toed cats are extra special.

This article was originally published on Answers.com and is republished with permission.

14 Comments on Polydactyl Cats: Why Do Some Cats Have Extra Toes?