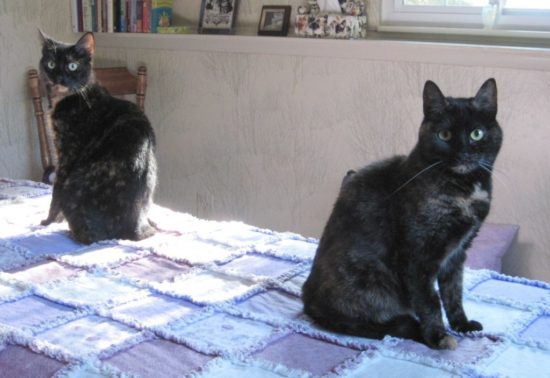 I actually found a definition for the word “zoomies” in Urban Dictionary, and even though the definition was for dogs, it’s exactly what I’m talking about: “when your dog runs around the house like crazy jumping on the couch, running up and down the stairs, and all over the house. It usually ends with them falling to the floor, panting like crazy and taking a nap.”

At our house, Ruby is the Queen of the Zoomies. Several times a day, she races through the house, up and down the cat tree, and up and along the back of the sofa. Her zoomies loop seems to be almost exactly the same every day.

Allegra’s version of the zoomies is a little more dignified. It usually starts with a little chirp – you know, that “brrpp” sound cats make – and then she’ll jump and run down the hall, or down the stairs and around the kitty playroom downstairs. She doesn’t really zoom, though; her version looks more like a gazelle leaping through the African desert.

I often wonder what goes through their minds when they get the zoomies, and decided to go straight to the source.

Ruby: I do it because it’s fun! Wee!!! I like seeing how fast I can run and how high I can jump! It’s like I’m flying! All that’s missing is my supercat cape!

Allegra (rolls eyes): You’re too much of a klutz for anyone to believe that you’re flying, Ruby. How many times do you start up that cat tree and almost fall off because you miscalculated?

Allegra: I like running and jumping. It makes me happy. I pretend that I’m a ballerina!

Allegra: You wouldn’t know a ballerina from – well, whatever. It means that I’m graceful and pretty!

Ruby: I’d rather be fast!

And there you have it – an explanation for the zoomies, brought to you by Ruby and Allegra.

Do your cats get the zoomies?

This post was previously published January 2013 and has been updated.

59 Comments on Does Your Cat Get The “Zoomies?”