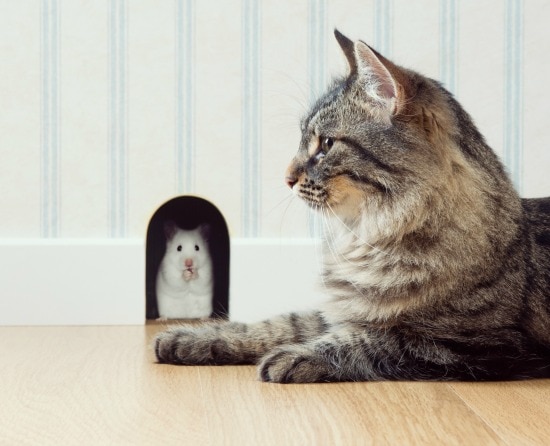 The other day, I was in my laundry room when I saw a tiny little mouse scurry across the floor in front of my feet. And while I think mice are adorable, I don’t really want to share my living space with them. Of course, this also explained why Allegra and Ruby had been hanging out outside the laundry room door quite a bit lately!

The girls are not allowed in the laundry room. It’s unfinished, and there are too many nooks and crannies they could get stuck in, so it’s off limits to them. So letting them loose in there to catch the mouse wasn’t an option – and quite frankly, even though I’m all for letting cats be cats and exercising their natural instincts on a toy mouse, I really didn’t want that poor little mouse to get killed.

So I set a humane trap. I baited it with cheese. I checked it several times throughout the day, before I went to bed, and first thing in the morning. Two days in a row, the trap was empty, but it hadn’t sprung. Our little mouse was apparently pretty smart. On the third day, I baited the trap with peanut butter.

I had just gotten comfortable in my jammies, settled in for an evening of watching TV. All of a sudden, something said “go check the trap.” And sure enough, the trap had worked, and there was a very unhappy little mouse inside.

It was cold and rainy outside. I really didn’t want to outside, but I knew I couldn’t just let the mouse loose right outside my door or she would run right back inside. So I got dressed, and drove the mouse to my neighborhood park, where I released her in the cold rain. Godspeed, little mouse.

I could swear that Allegra and Ruby gave me dirty looks when I got back home for spoiling their fun, though… I can just imagine how that conversation went. 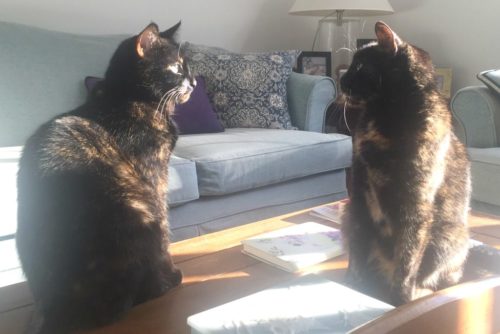 Ruby: Why is Mom spending so much time in the laundry room, Allegra?

Allegra: I don’t know, Ruby. Maybe she smells that strange smell we’ve been smelling? And she went in there with some cheese. And she didn’t give us a piece first! That’s just so wrong!

Ruby: Why won’t she let us in that room?

Allegra: She says we could get in trouble in there.

Ruby: Mom always says my middle name is Trouble! I should be allowed in there!

Ruby: I don’t smell that strange smell anymore. Do you?

Allegra: No, I don’t. I stopped smelling it after that night when Mom went out in the rain for just a few minutes and then came right back.

Ruby: Huh. Oh well. Mom, can we have some tuna?

18 Comments on A Mouse in the House