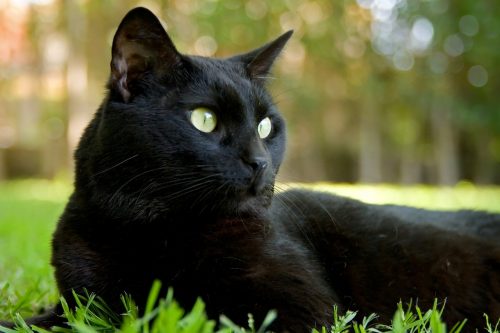 Prejudices and misconceptions about  black cats range from the ridiculous to the bizarre. They have played a major role in superstitions, folklore and mythology for centuries. In the Middle Ages, black cats were believed to be witches’ familiars, and many even believed that black cats were reincarnated witches or messengers of witches or demons. This association of black cats with witches has become so ingrained in our culture that they’ve become synonymous with Halloween.

Interestingly, the folklore surrounding black cats varies from culture to culture. In Britain and Japan, having a black cat cross your path is considered good luck; in the United States and several European countries, having a black cat walk by is considered bad luck. It even seems to make a difference from which direction the black cat comes from: In Germany, some believe that black cats crossing a person’s path from right to left is a bad omen, but from left to right brings good luck.

In Japan, young women are encouraged to own a black cat to attract romance. I suppose attracting a guy who loves black cats is a pretty good start to a relationship!

Due to a special pigment called melanin in their fur, many black cats will temporarily turn a dark brown color if they’re in the sun.

Black cats may be more resistance to disease

Research suggests that two genes associated with melanism may cause black cats to be more resistant to bugs.

Thankfully, despite all of the myths and superstitions these black house panthers have a large, loyal following of people who appreciate the sleek, gorgeous creatures in all their beauty.