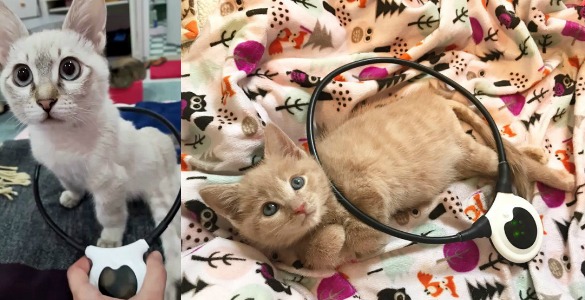 We’ve featured several case histories over the past several months of how the Assisi Loop has helped cats with various conditions. Today, we’re featuring two kittens, both with hind leg paralysis, who’ve made remarkable progress thanks to the Loop. Max, a four-month-old kitten, was found near a trash can in Kuwait when he was about 5 weeks old. Chloe was rescued from a Washington DC shelter at the age of 6 weeks by Hannah Shaw aka the Kitten Lady.

When Max’s human Ghofran found the severely dehydrated and starving kitten near a trash can in Kuwait, she didn’t think he would make it through the night. There are no veterinary emergency clinics, so she had to wait until morning to take him to a vet. Luckily, he made it. Max was treated with IV fluids and other supportive care. “He had to stay for several days but he refused to give up,” said Ghofran. “The doctors were amazed that he survived.” As Max started to grow, he started to limp. “A few days later he seemed to be in severe pain where he wouldn’t stop meowing all day and night,” said Ghofran. He couldn’t move or be touched. X-rays  showed a deformed and curved spine, curved knees and elbows, and some pieces of bone were missing. “Nothing looked like it should,” said Ghofran.

The vets think it’s a case of osteoarthopathy, a disorder affecting bones and joints. Max was treated with anti-inflammatory medication, pain killers and laser therapy, but did not respond. The vets suggested putting him to sleep since the pain would only get worse as the bones grow. But Ghofran wasn’t ready to give up yet. “Max is 4 months old now, and after surviving once and fighting so hard to stay alive, I don’t believe he fought death just to be put to sleep again,” she said. 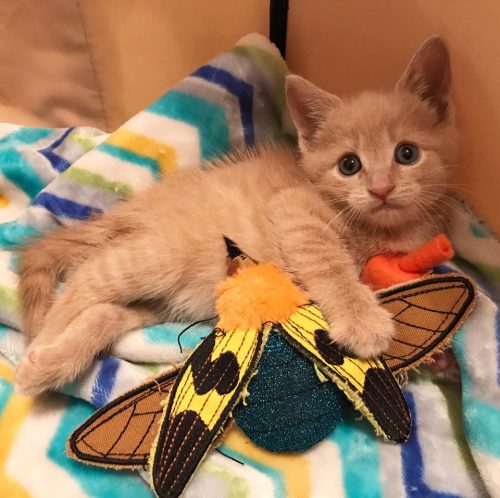 When Hannah Shaw aka the Kitten Lady went to a Washington DC shelter to pick up an orphaned kitten, she didn’t expect to walk out with another kitten, but when she met six-week-old Chloe, she simply couldn’t leave here there. Chloe’s hind legs were paralyzed, and she was unable to void her bladder without assistance.

Hannah took Chloe to several vets, including two neurologists. X-rays showed no damage to the spine, but Chloe’s prognosis appeared to be uncertain at best. Hannah wasn’t ready to give up. She started acupuncture treatments for Chloe, and she also began using the Assisi Loop. “Right after her first session on the Loop, she actually began to regain partial use of her bladder,”  said Hannah. Doctors had told that that would likely never happen for her entire life. “She is now peeing when stimulated (as opposed to having to have her bladder expressed), which is honestly so shocking and exciting I can’t believe it,” she adds.

Chloe receives Loop treatments 3-4 times each day. “Since she’s a kitten, she’s got high energy, so we always wait until she’s in nap-mode,” says Hannah. “Then we run over and plop the loop on her while she sleeps!” Hannah considers the Loop an important part of Chloe’s recovery. “Her treatment is all about trying to heal the region around her spine to the best of its ability, and to decrease inflammation and increase cellular regeneration.”

Photos of Max by Ghofran A., photos of Chloe by Andrew Martilla, used with permission

2 Comments on How the Assisi Loop Is HelpingTwo Paralyzed Kittens