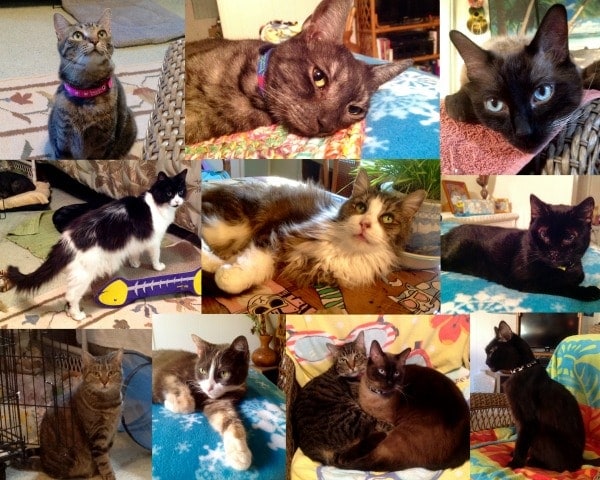 During my recent visit to Los Angeles, I met nine cats and Chery, the woman who is caring for them. I meet a lot of cats in my work, but rarely have I been as affected by an encounter as I was by this one. These cats lived through trauma and hardship. They are a testament to the resilience of animals, and their ability to live in the moment, no matter what they may have encountered in their past. Spending time with Chery and the cats was a magical and humbling experience. This is their story.The cats, left to right, top row: Sandy, Ramses, Patterson, second row: Arwen, Zazu, Julia, third row: Tweety, Noodle,Tweety and Patterson, Julia

A year later, the homeless woman came back to the church parking lot, this time without a car. All the cats were in carriers, some two to a carrier. Her beautiful dog was on a leash. She set up camp behind the dumpsters. “These wonderful cats were living in carriers on towels, sitting in their own waste,” said Chery. She called the ASPCA. They gave her the names of local rescue groups, but none could help. When Chery called animal control, they told her that the shelter was overcrowded, and since almost all of the cats were seniors, chances were high that they would be put down.

On Wednesday, October 28, 2015, Chery received a call from someone at the church. The homeless woman was finally ready to surrender the cats. Chery picked them up the very next day and got them set up in her guest house. The woman and her dog left California.

Once the cats were safely situated, Chery’s friends came to help. They set up an assembly line. Every cat was bathed, blow dried and received a flea treatment. The cats patiently tolerated all of it. “One of the most wondrous things I’ve ever seen was watching these cats making themselves at home as if they had never been away,” said Chery. “Just imagine what having a full food bowl, fresh water, comfortable soft snuggly places to nap, and clean litter boxes must have been like for them!” 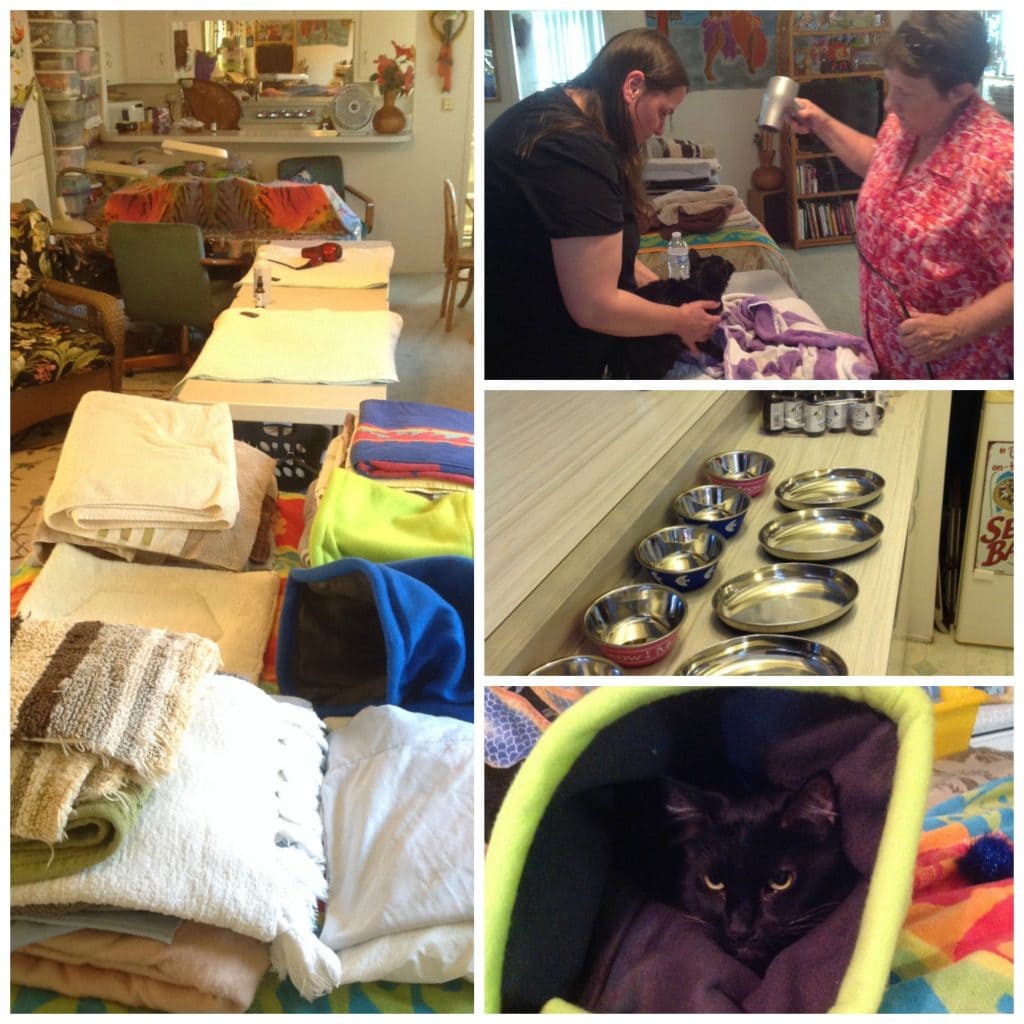 Next on the agenda was getting everyone to the vet. When Chery called to set up appointments, her vet asked if any of them looked like they wouldn’t make it, so that they could be seen first.

Zazu was 6lb & 6oz. “I’ve never seen a cat that thin,” said Chery. “He should have been a 12 to 14 pound cat. I really wasn’t sure he would survive.” A blood test revealed hyperthyroidism. With a vitamin B shot and thyroid medication, Zazu was on his way to getting better. He still needed dental surgery, but that would have to wait until he put on some weight. Since then, Zazu has gained weight, and his dental needs have been taking care off. He had several abscessed teeth removed.

Ramses has a sinus condition that he most likely had his whole life. He was started on steroids and antibiotics, and is also being treated with homeopathic remedies. “His healing is still a work in progress,” said Chery.

Noodle had serious dental problems. “When I took her to the vet, they said they had never seen a mouth that bad,” said Chery. “I could see she was in a lot of pain. Her mouth was so swollen, but she was still just a little lover!” Noodle ended up having all her teeth pulled. “Today, she is happy, painfree and eating like a champ,” said Chery.

Next in line was Julia. “She’s the sweetest little cat ever!” said Chery. “She only weighs 5 lbs. 5 oz, and just wants to sit in your lap all day.” Julia has had multiple challenges all her life. When she was a kitten, someone forced her eyelids open and tore them, so she cannot completely close her eyes. She’s also partially blind. She has stomatitis, a painful dental condition. “I have taken her to my vet over two dozen times,” said Chery. Julia has been treated with antibiotics and steroids, and is on pain medicine to keep her comfortable. “It’s an amazing thing to witness how all the other cats seem to gather around her when she’s not feeling well,” said Chery. “We all love Julia!”

Arwen’s blood test came back with great results, but she has a broken tooth in the front of her mouth. The vet felt it was better just to leave it alone as it’s not causing her any pain at this time. 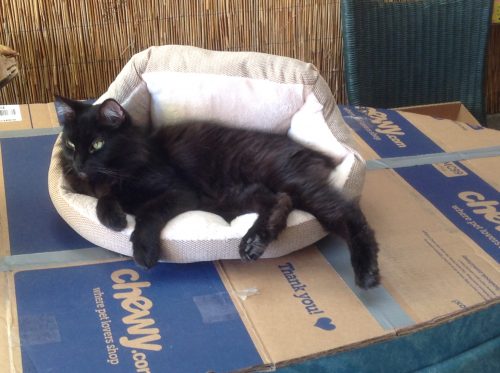 Moofy, “a big, funny, goofy cat and kind of a scaredy-cat,” according to Chery, also had a mouthful of problems with multiple abscessed teeth. Once Moofy reached a safe weight, they pulled most of his teeth, and discovered that his jaw had been broken in an earlier injury. Today he’s happy, healthy and gaining more weight. 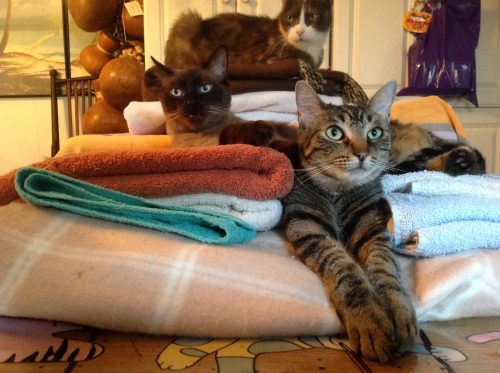 Patterson and Tweetie found new homes three weeks after they came to Chery’s guest house. They were litter mates and, at five years old, the youngest of the group. “They were adopted by a lovely woman who lives not far from me,” said Chery. “I go visit them as often as I can.”

And last but not least, there is Sandy. She came from a hoarding situation with 86 cats in one house, and went from there to living with the homeless woman. “She is a sweet cat who keeps to herself,” said Chery. Sandy will need to be with someone who understands feral behavior. “With lots of patience, love and understanding, Sandy could be a great cat,” said Chery. For now, she gets to stay in Chery’s guest house with the others.

Come back tomorrow for Part Three: It’s a Wonderful Life

13 Comments on Nine Lives: A Story of Catastrophe, Compassion and Caring – Part Two: The Cats Return