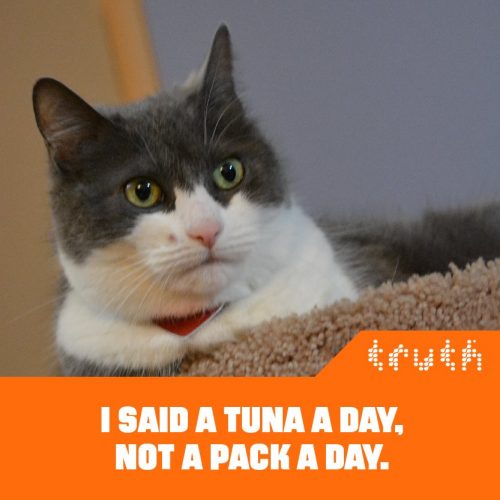 Secondhand smoke is not just dangerous for humans, it also affects cats. Cats living with smokers are twice as likely to develop malignant lymphoma than those in non-smoking households. Cats with five or more years of exposure to tobacco smoke were at more than three times greater risk of developing lymphoma. Studies also suggest a link between oral cancer in cats and exposure to tobacco smoke. It is thought that cats groom the tobacco residue off their fur, which then damages tissues in the mouth, leading to cancer.

A 60-second public health commercial using the hashtag #CATmageddon, which debuted during the Grammy’s on February 15, communicated this message in a highly creative, and also chilling, manner. “Can Smoking Kill Cat Videos?” is the premise of the video: smoking = no cats = no cat videos.

Thanks to 110+ million people who watched the video aimed at teens and young adults that warned pets are twice as likely to get cancer if their owner smokes, #CatMageddon has been avoided. Millions learned of the deadly implications smoking has on pets. In fact, youth who watched the #CATmageddon video on YouTube were twice as likely (100.9% lift) to search “quit smoking” on Google or YouTube. What’s more, these #CATmageddon-exposed youth were 16.44% more likely to respond that they would not smoke, compared with a control group of very similar users who did not watch the video. This number jumped to 34.43% for viewers who watched the spot 3+ times.

To celebrate this huge leap forward, truth, the organization behind the campaign, released a new video that shares this victory, while also rallying teens to have their pets help show their support through a PEEtition unlike anything ever seen before (check out the video below to learn more). While this has been a big win towards decreasing the teen smoking rate (currently at 7%,) the fight is still not over until it is at 0%, so truth is empowering this generation to join together to make smoking a thing of the past.

Visit truth.com for more information and to sign the PEEtition.