I spent last weekend at the Reef in downtown Los Angeles, along with 15,000 other cat lovers, at CatConLA. This was the second year for this gathering of cat enthusiasts from around the world, but my first year. I attended in dual roles as both vendor and press, and I’ll have lots of stories for you in the weeks and months to come. Today, I’m sharing a few personal highlights.

People were lined up outside the doors to get in as soon as the doors opened at 10am on Saturday, and the flow of cat lovers never slowed down until the end of each day. I don’t think I’ve ever seen so many cat t-shirts in one place! But people didn’t stop at t-shirts. Many got super creative, showing up dressed up as cats, had their faces painted as cats, and sporting cat accessories of all sorts.

Traffic at our booth was steady, and a huge thank you goes out to my two dear friends and helpers, Healthy Pet Coach Jodi Ziskin and Cathi Marro, an artist and musician. Their assistance was invaluable as it allowed me to spend a little time walking around the Reef so I could visit with vendors. I also got to meet one very special little cat. 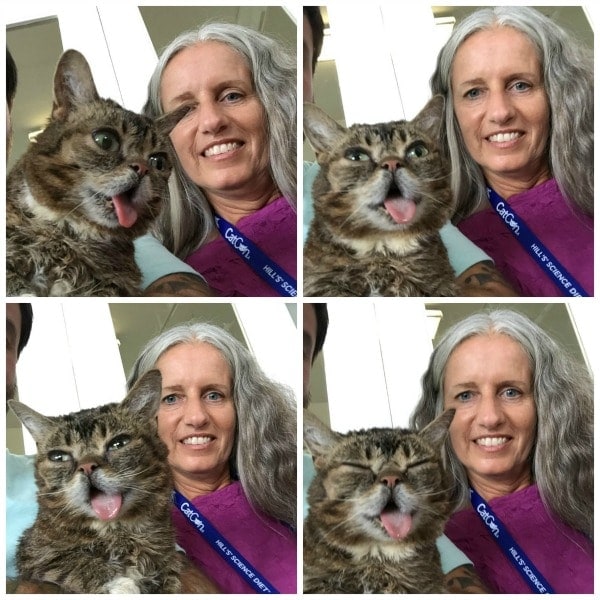 Even though I had been in touch with Lil Bub’s dude, Mike Bridavsky, for a couple of years, I never had a chance to meet Bub – until Saturday. And she’s every bit as special as everyone who’s met her says she is. The energy coming off this tiny little cat (and she’s even tinier in person than I thought she’d be) is absolutely magical, and watching the bond between her and Mike in real life, and not just through photos and videos, touched my heart deeply. Mike snapped a series of photos with Bub and me. I also got to pet Bub, and I loved how her eyes closed when I petted the top of her head. I felt like I’d been given a very special gift. 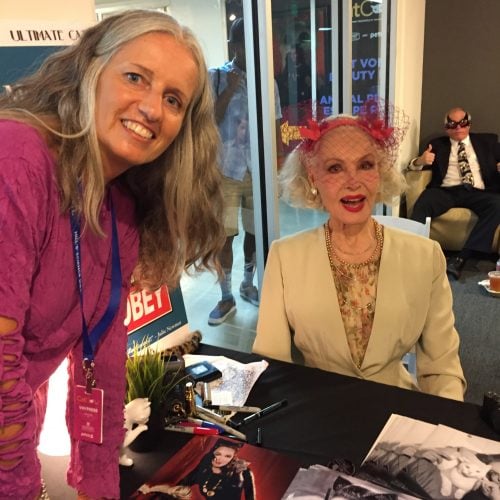 The other absolutely amazing encounter I had at CatCon was with Julie Newmar, the original catwoman, who held a meet and greet at the Reef. She couldn’t have been more gracious, and she is still stunningly beautiful at age 82. 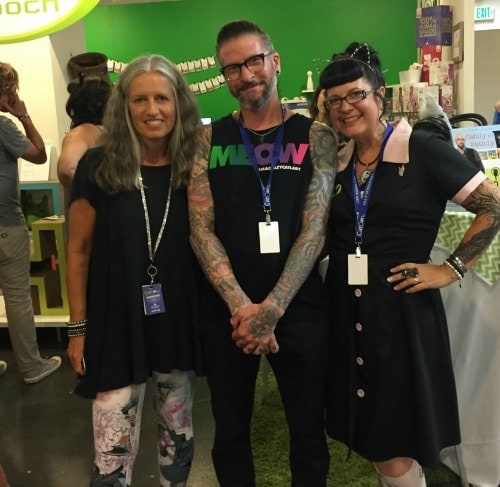 I was also delighted to finally meet Daniel “DQ” Quagliozzi of Go, Cat, Go Cat Behavior Counseling in person. Daniel and I had previously connected online, and it was great to get to spend some time together. And of course, it’s always wonderful to see Kate Benjamin, even though it was only very briefly this time. 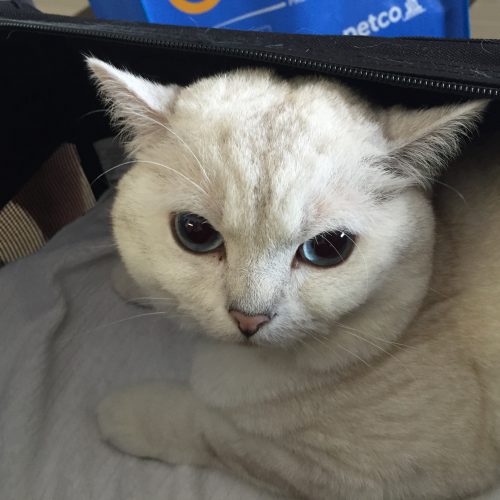 I never got a chance to meet Nala and Pudge, but I met Nala’s brother, White Coffee Cat. Coffee was recently diagnosed with lymphoma, for which he is currently being treated. I briefly spoke with one of Coffee’s guardians, and will be bringing you a full story on how they’re coping with his illness, because I feel that there are a lot of valuable lessons in how they’re dealing with caring for a cat with cancer for other cat guardians facing this disease.

We even had some torties visit our booth. Well, they were flat torties, but it still counts! And one lady had the image of her beloved tortie tattoed on her back in memory of her beautiful girl.

CatConLA was a non-stop feast of delights for cat lovers. There was so much to see! There were hundreds of vendors selling anything from cat toys to cat clothing (for humans) to cat accessories. There were lots of special events and seminars,and in addition to being a super fun event, CatConLA also led to forever homes for 97 lucky kittens who were on site with the SPCA LA.

If you missed it this year, put CatConLA on your schedule for next year. This was the convention’s second year, and it was bigger and better than the first. And even though it’s hard to imagine, I’m pretty sure 2017 is going to surpass this year’s experience.

7 Comments on CatConLA: Heaven on Earth for Cat Lovers