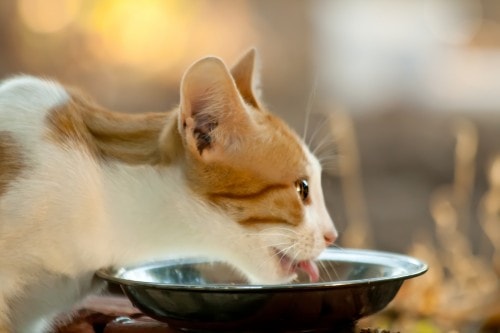 Frequently, the first advice guardians of a cat who was just diagnosed with kidney disease hear from the veterinarian is that the cat should eat a renal “prescription diet”. That’s because there are research trials that have shown that restricted protein diets can prolong renal function. However, there is more to feeding a cat with compromised kidney function than simply restricting protein. The consequences of making poor dietary choices in these cats can be dire.

Cats are unique among carnivores in that they are “hyper-carnivores.” They cannot survive, let alone thrive, without protein. Adequate, high quality protein is essential for a functioning immune system, hormone production and a world of other uses for the building blocks of protein, amino acids. Unlike other mammals, in addition to all that, cats can’t efficiently make energy from anything other protein.

When protein is inadequate, cats’ bodies start to use the protein they have – the muscle they carry on that lovely frame. Even overweight cats may lose muscle mass if they are getting too many calories from fat and carbohydrates. Several recent research studies have shown that cats who lose muscle in this way die sooner, acquire more and more severe diseases, and have a poorer quality of life.

In addition to protein restriction, renal diets contain additional potassium, lower sodium, low phosphorus and, in some cases, added Omega-3 fatty acids. All of these components are good for cats with kidney disease. What may not be desirable is the limited protein.

One recent study showed that cats require 40-45% protein on a dry matter basis to maintain good body condition. Another study shows that cats over 12 years of age, just about the time that their kidneys may be working less well, become less efficient at metabolizing fat and protein. This study concluded that cats over 12 may require 25% more calories and protein to maintain their body condition than younger cats.

We need to stop thinking that any one diet is good for all cats with chronic progressive kidney disease. The far more important question to ask may not be how much protein, but how good the protein is.

In addition, as cats have more progression of their kidney disease sometimes appetites diminish a bit. Since cats choose food based upon three characteristics: texture or “mouth feel”, aroma and taste, we must live by the golden cat rule: “it is more important that she eats than what she eats.” Attempting to impose our ideas about good food can imperil them should they not agree. Choose the best canned food your cat will enthusiastically consume.

Cats in the wild are wary of change. They will sniff a new prey before consuming it and if that food is perceived to cause discomfort or an upset tummy, they will NEVER eat it again. Some cats experience a bit of nausea from their kidney disease. It must be treated so that they don’t associate that discomfort with the food you offer. If they do, that food will end up in the garbage along with any other variety you may select in the future.

The importance of water for cats with kidney disease

Water consumption is one key to preserving as much functioning kidney tissue as possible and thereby preserving quality of life. Though cats with kidney disease consume lots of water, it is in large part because their kidneys cannot retain it as efficiently as they used to. So the universal truth is “the more moisture the better” – that means no or as little dry food as possible, flavored waters like tuna juice, clam juice, chicken broth, and canned food exclusively if possible. Some cats don’t mind “soupy” food so warm broth or water can be added to it. A water fountain and/or multiple places around the house to drink may be helpful. The other rule is “whatever way your beloved cat will drink”. Like us, they have their preferences!

Restricting phosphorus may be even more important for cats with kidney disease than restricting protein. We know that the high phosphorus content found in higher protein diets can accelerate the decline of function when it gets trapped in the “work unit” of the kidney.

There are two ways that phosphorus is reported in food. Look for 0.3-0.6% on a “Dry Matter Basis” (DMB) or 0.7-1.26 grams per 1,000 kcal. Phosphorus content is generally not available on food labels, but can be obtained by calling the food’s manufacturer. For easy reference, Dr. Lisa Pierson offers both a Phosphorus in Cat Food Chart and a Protein/Fat/Carbs Chart  on her site Catinfo.org.

My 22-year-old Woody was diagnosed with early stage kidney disease in 2007. He gets a high protein diet with a phosphorus binder in each meal. He is also hyperthyroid and a handful. So I decided many years ago to try an iodine restricted diet rather than medication. After a time, I noticed that I could feel the bones on the top of his back, a sure sign that he was using up his muscle for energy. I had neglected to check the protein content which was less than 35%. His new diet is about 50% protein between the canned and dry formulas he likes and is willing to eat. He got all of his muscle back.

The importance of maintaining good muscle condition in older cats cannot be overstated. The ways we do that may vary from beloved cat to beloved cat, but the goal should always remain the same.

Editor’s note: We cannot verify the veracity or accuracy of information or recommendations provided in reader comments.

Dr. Elizabeth Colleran is a 1990 graduate of Tufts University School of Veterinary Medicine. She holds a Masters of Science in Animals and Public Policy, also from Tufts University School of Veterinary Medicine. In 2011, she was the President of the American Association of Feline Practitioners (AAFP). She is a Diplomate of the American Board of Veterinary Practitioners, Specialty in Feline Practice. As the spokesperson for the AAFP initiative Cat Friendly Practice, she speaks at major conferences around the country. Dr. Colleran owns the Chico Hospital for Cats in Chico, CA and the Cat Hospital of Portland in Portland, OR.

244 Comments on The Right Diet for Cats with Kidney Disease