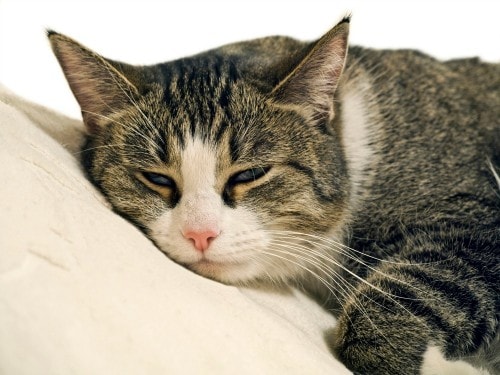 Upper respiratory infections are common in cats, and the symptoms of these kitty colds – sneezing, runny nose, runny eyes, lack of appetite, fever – are very much the same as what we experience during a cold. In addition to conventional treatments such as antibiotics or antiviral drugs, L-Lysine supplementation is often recommended to treat symptoms and prevent a recurrence. According to a recent study, more than 90 % of veterinarians in cat hospitals recommend L-Lysine supplementation.

L-Lysine does not have antiviral properties, but researchers found that it does lower arginine levels. Arginine is an essential amino acid that is involved in a number of different functions, including wound healing, helping the kidneys filter waste products, and maintaining immune and hormone function. Cats cannot synthesize this amino acid themselves, and arginine deficiency can result in hyperammonemia (a metabolic disturbance characterized by an excess of ammonia in the blood,) which can be fatal.

Finally, and most importantly, several clinical studies with cats have shown that L-lysine is not only not effective for the prevention or the treatment of feline herpesvirus 1 infection, some even reported increased infection frequency and disease severity in cats receiving L-Lysine supplementation.

Should you stop L-Lysine supplementation?

The study’s conclusion recommends an immediate stop of L-Lysine supplementation because of the complete lack of any scientific evidence for its efficacy. Fern Crist, DVM, a former board member of the American Association of Feline Practitioners, says she can’t count the number of cats she’s put on L-Lysine over the more than 30 years she’s been practicing, but says that, based on these findings, “I’m inclined to stop using L-Lysine, at least for the time being, and wait for more information.” Dr. Andrea Tasi, a feline veterinarian and owner of Just Cats Naturally, doesn’t recommend L-Lysine anymore. “Over time I came to see it didn’t do much for most cats,” she says.

You can read the full text of the study here.