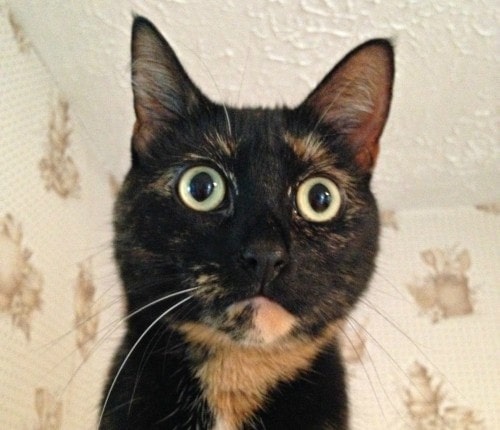 This is the second installment of our four-part series Allegra Goes to the Dentist, in which I share my recent experience with Allegra. I’m hoping that it will not only put your mind at ease if you’re faced with a cat who has to have a dental procedure, but that it will also help you ensure that your cat gets the optimal level of care before, during and after her dental work.

If you’ve missed the first part in this series, please read Allegra Goes to the Dentist – Part One: Diagnosis, and Choosing a Veterinary Dentist

No cat, no matter how young, should ever undergo anesthesia without preanesthetic bloodwork. Cats under seven years of age should get a CBC (complete blood count) and “mini” serum chemistry. If the cat’s FeLV/FIV status is not known, these tests should also be run. Older cats should have a CBC, complete serum chemistry, T4 and urinalysis performed.

Since Allegra is not an easy cat to examine, it wouldn’t be possible to draw blood from her during a home visit without causing her a considerable amount of stress, so I chose to have the bloodwork done the morning of the procedure.

We’ve had housecall vets since I adopted Allegra five years ago, so she had never been anywhere. I admittedly felt uneasy about this for quite some time, and had finally started carrier training for her and Ruby in late July, after I received two Sleepypod carriers for review, but I probably wasn’t consistent enough, and it wasn’t enough time to get Allegra comfortable with the carrier. Rather than forcing the issue, I chose to go with an older SturdiBag pet carrier. That carrier is always out in our family room, aka the kitty playroom, and Allegra occasionally naps in it. I placed it in our bedroom a couple of weeks prior to the scheduled procedure. It seemed to remind her that she likes it as a napping spot, and she even slept in it a couple of nights.

I chose not to do “trial runs” with her to get her used to the car ride. While this is advised as part of carrier training, Allegra has a very long memory and doesn’t forget negative experiences easily. I was worried that for  her, short trials would actually make it harder to get her in the carrier the day of the procedure. I was hoping to use surprise to my advantage. As with so many things with cats, sometimes, you have to adapt the rules for your own cat’s personality.

Managing anxiety – Allegra’s, and my own

I was pretty anxious about the whole thing, and I had to be careful to make sure that Allegra would not pick up on my nervousness. While I needed to spend time planning the various aspects of this process, I also knew that I couldn’t spend the month between the time I scheduled the procedure and the actual date constantly worrying about it, so I forced myself to put it out of my mind each time the worry and anxiety entered my mind. I allotted myself a 5-minute worry period once a day, but that was the only time I got to worry about it.

As the date got closer, I got a little extra help in the form of an herbal remedy. Ashwaganda Root  helps reduce anxiety and supports a healthy stress response. It made a significant difference in how I felt. I used Spirit Essences Stress Stopper for Allegra. I was also planning to use Comfort Zone with Feliway Spray to spray the carrier and inside of the car the day of travel. I would also liberally spray Stress Stopper throughout the car.

I was also concerned about Ruby. She had never been separated from Allegra before. Would she be scared, having the house all to herself? Would she not recognize Allegra when we returned from the clinic?

It’s an all too common scenario: when one cat returns from the vet, the cat who stayed at home greets her former friend with hisses and growls, and may even attack. Experts are not sure what causes this form of aggression. Most likely is is caused by the returning cat smelling differently. Additionally, a cat who was under anesthesia may behave differently, which may be perceived as a threat by the cat who stayed at home.

I decided that Ruby would spend the time Allegra and I would be gone in the “forbidden room” aka our guest bedroom. It’s the only room in the house that is usually closed off to the girls, and as such, it has become a special treat for them when they get to go in there and explore. I knew being alone would be stressful for Ruby, and I thought the novelty of being in the “forbidden” room would help.

I followed Pam Johnson-Bennett’s advice for preventing this type of aggression. I took a pair of clean socks and rubbed them over Allegra to collect her regular scent. I focused especially on the areas on her cheeks to collect the pheromones. I sealed the socks in a plastic bag. Then I repeated the procedure to collect Ruby’s scent, and sealed those socks in a separate bag. On our return, I would rub Allegra’s scent all over her to help get rid of the clinic smell. I would also rub Ruby’s scent all over Allegra to create the “group scent” that they’re normally used to from each other.

2 Comments on Allegra Goes to the Dentist – Part Two: Preparation