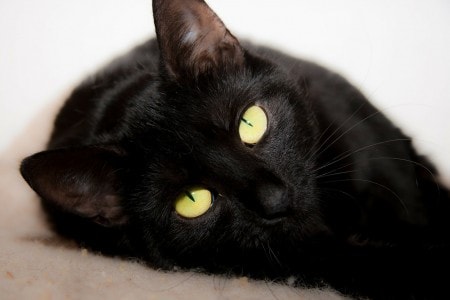 Black cats have played a major role in superstitions, folklore and mythology for centuries. In the Middle Ages, black cats were believed to be witches’ familiars, and many even believed that black cats were reincarnated witches or messengers of witches or demons. The association of black cats with witches has become so ingrained in our culture that they’ve become synonymous with Halloween.

The cat wasn’t associated with witchcraft until sometime in the 16th century. A popular British legend claims that in the 1560’s, a father and son were frightened by a small creature darting across their path on a moonless night. After throwing stones after the creature, they saw that it was an injured black cat dart out of a crawl space and into the home of a woman suspected to be a witch. When the father and son saw the woman on the street the next day, the woman walked with a limp and had a bruised and bandaged face and arm. From that day on, all black cats were suspected of being witches, and apparently, the legend held. This notion of witches transforming themselves into black cats became a mainstay of belief during the Salem witch hunts in America.

Interestingly, the folklore surrounding black cats varies from culture to culture. In Britain and Japan, having a black cat cross your path is considered good luck; in the United States and several European countries, having a black cat walk by is considered bad luck. It even seems to matter from which direction the black cat comes from: In Germany, some believe that black cats crossing a person’s path from right to left is a bad omen, but from left to right brings good luck.

Black cats are said to bring good luck to sailors, whereas most gamblers believe that when a black cat crosses a player’s path, they should not go to the casino.

Thankfully, despite all of these superstitions, black cats have a large, loyal following of people who appreciate these sleek, gorgeous creatures in all their beauty.

This article was first published on Answers.com and is republished with permission.

16 Comments on Black Cat Superstitions and Their Origins