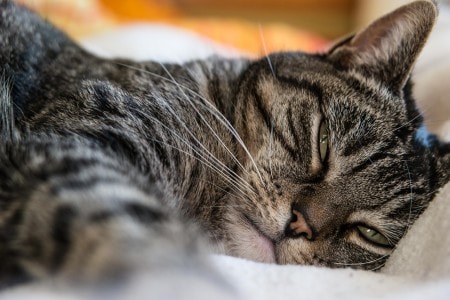 The FDA is alerting pet owners, veterinarians, health care providers and pharmacists that pets are at risk of illness and death when exposed to topical pain medications containing the nonsteroidal anti-inflammatory drug (NSAID) flurbiprofen. People using these medications should use care when applying them in a household with pets, as even very small amounts could be dangerous to these animals.

Sadly, the FDA received reports of cats in two households that became ill or died after their owners used topical medications containing flurbiprofen on themselves to treat muscle, joint, or other pain. The pet owners had applied the cream or lotion to their own neck or feet, and not directly to the pet. The products contained the NSAID flurbiprofen and the muscle relaxer cyclobenzaprine, as well as other varying active ingredients, including baclofen, gabapentin, lidocaine, or prilocaine.

According to the FDA safety bulletin, two cats in one household developed kidney failure and recovered with veterinary care. Two cats in a second household developed signs that included reluctance to eat, lethargy, vomiting, melena (black, tarry, bloody stools), anemia, and dilute urine. These two cats died despite veterinary care. A third cat in the second household also died after the owner had stopped using the medication. Veterinarians performed necropsies on the three cats that died and found evidence in the kidneys and intestines that were consistent with NSAID toxicity.

The FDA bulletin states that “it is not known exactly how the cats became exposed to the medication,” but I don’t think it takes much imagination to determine how this might happen. While it’s not known whether ingestion or absorption through the skin caused the deaths in the two cats, cats and topical creams are often a bad combination. Even many conventional cosmetics contain ingredients that can be harmful to cats (and humans, for that matter.) Cats can come in contact with creams by rubbing up against their humans, or by licking the area the cream was applied to. They could also come in contact if humans pet their cats after applying the cream to themselves.

It’s always good practice to keep all human medications away from pets, but it’s especially important when it comes to topical medications.

You can read the full safety alert on the FDA website.