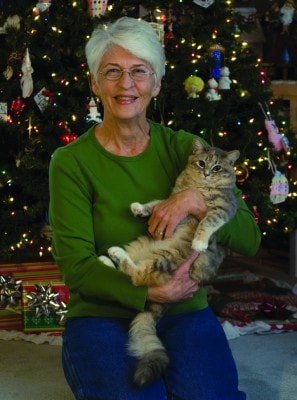 When I decided to add a new dimension to my writing repertoire—to pen a novel—I was pretty sure there would be cats involved.

I’d been writing for publication for over forty years by then—all nonfiction. I was one of those rare birds who figured out how to combine my passion for writing with my need to earn a living and I became a freelance magazine article writer. I also wrote a few books along the way—all nonfiction. While I wrote on a variety of topics, a favorite was cats, thus many of my articles appeared in the old Cats Magazine, Cat Fancy, ASPCA Animal Watch and other such publications. Being an admirer of and caretaker for many cats over the years, I researched and wrote articles responding to my own experiences, issues, concerns, questions, and curiosities about the feline species. Over time, I had also collected many true stories which remained unpublished until 2010.

That’s when I went out on a limb and wrote my first book about cats. Catscapades is a compilation of true cat stories featuring cats I’ve known and loved—the cat who obediently went into the cat carrier in response to mind-talk, happy endings for a couple of feral kittens, the male cat who babysat, the hateful cats who learned to love one another, the cat who swallowed a needle and lived to purr about it, and so forth. What a joyful project. The process of bringing cats to life on the pages of this book was a challenging exercise and a labor of love. But I wanted more.

I wanted to honor the cats that have inspired and delighted me over many years, from the kittens who distracted me from my work to the settled cats who kept me in my chair by curling up on my lap as I wrote. I wonder how many words would have gone unwritten, but for the cat on the author’s lap. 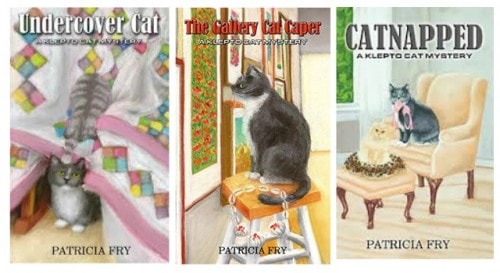 In 2012, as a birthday gift to myself, I decided to write a novel. Of course, my story would involve cats. After much thought and a few false starts, the Klepto Cats mystery series

was created. People ask what’s my secret for bringing cats to life on the pages of these stories and how do I create the roles for these cats. I tell them that, along with constant research, I call upon what I know—my own experiences with cats. One of the most enjoyable methods I use for portraying cats in my stories is to watch our three cats as they interact with each other, when they are at rest or play—I pay attention to their attitudes, their movements, their stance, etc. and then I practice describing it.

Actually, Ragsdale (a.k.a Rags), the starring character in the Klepto Cat Mystery series, was patterned after my mother’s large, grey-and-white cat, Smokey. I chose him because he is curious, funny, confident, clever, and rather creative. He’s determined to have his way, whether it’s to go outside, dump his basket of toys over for the umpteenth time, or catch a lizard. He isn’t a kleptomaniac, however and he doesn’t carry things around in his mouth—but our kitty, Lily, does. So I’ve combined her habit of stealing things with Smokey’s personality, demeanor, and looks; and created Rags.

I’m not the first author to write with cats. Cats and writers go together and have for eons. What can a cat bring to the desk of a writer? Probably each writer can come up with something different. For me it is the calming effect. You’re not totally alone, yet the creature who is sprawled across your desk, lying in your in-basket, or curled up on your lap is quiet. She allows you—maybe inspires you—to focus on the project at hand. Her mere presence lightens your mood and fills your heart.

My cats have taught me a few things about my computer, when they inadvertently step on a key that takes me where I’ve never been before and I have to figure out how to fix it. They remind me to take breaks when they’re ready to play or it’s time to eat. They teach me patience when things aren’t going well with a project—they help me to see the humor in the moment. And they are my inspiration. 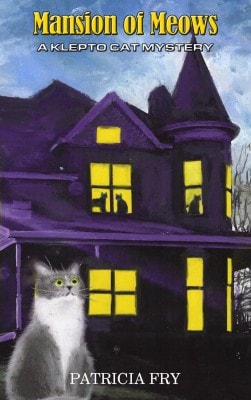 Patricia Fry is the author of 49 books, and counting. She just published the 9th in the Klepto Cat Mystery series, Mansion of Meows. The Klepto Cat Mysteries are light, fun cozy mysteries full of adventure, intrigue, and a little romance. They feature Rags, an ordinary cat who just can’t keep his paws off other people’s things. Often, the treasures he finds are clues in a mystery. Follow Rags’s fascinating life path from when he and Savannah were single and he roamed the neighborhood stealing everything from toys belonging to large dogs to jewelry and bathing suits. Rags and Savannah don’t stay single long. After meeting Michael, a handsome veterinarian, Savannah settles down, but the cat doesn’t change his thieving ways. Even though his kleptomaniac habit is annoying and embarrassing to his family, he has earned the respect of the local sheriff’s department and he was even asked to star in a documentary. You can find all of Patricia’s books on Amazon.

16 Comments on Writing with Cats: A Joy and a Challenge