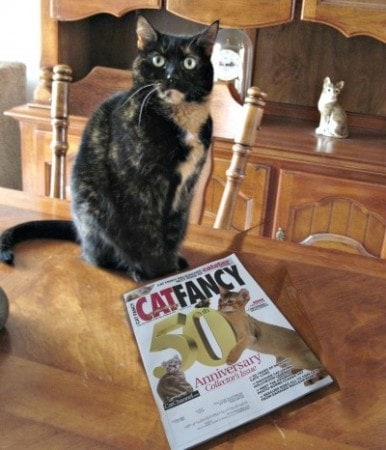 Earlier this week, I received Cat Fancy’s 50th Anniversary issue in the mail. It’s also, sadly, the magazine’s final issue. I had known about the magazine’s demise since the beginning of December, when I received a call from editor Susan Logan-McCracken. As a contributing writer, I very much appreciated that Susan took the time for this personal notification.

Cat Fancy was acquired by I-5 Publishing at the beginning of 2013. In July of 2014, the acquisition of Catster made I-5 Publishing the world’s largest owned and operated online pet network with approximately 5 million monthly visitors. I-5 also acquired CatChannel, Dog Fancy, and Dogster.

I’m very sad to see Cat Fancy go – not just because of its history, and because I was a contributor, but because I hate to see publications disappear that provide solid, factual information, to be replaced by glossy entertainment. It seems to be a trend in publishing in general, not just in the cat world.

I understand that publishing is a business. The trend in cat culture, especially online, is toward entertainment and humor, and there’s absolutely nothing wrong with that. And while I’d like to think there’s a place for both in this world, I also understand the economics of having to give the public what it wants.

My memories of Cat Fancy go back to the mid 1980’s, when I moved to the United States, and when my first cat Feebee came into my life. I knew nothing about cats at the time other than that I loved them. Cat Fancy became one of my most trusted sources of information for me (keep in mind, this was the dark ages before the internet…) and I looked forward to each new issue.

Cat Fancy is probably also ultimately responsible for helping me find work that I’m passionate about: writing about cats, and educating cat guardians about how to keep their cats happy and healthy. I have a vivid memory of reading an issue of the magazine sometime back in the mid 1990’s, thinking how cool it would be if I could find work that would allow me to work with cats all the time. Shortly thereafter, my “fancy” became a reality when I started working at veterinary hospitals. Then about eight years ago, I began writing (mostly about cats) full time.

The good news is that I-5 is not completely giving up on print media. Cat Fancy will relaunch as Catster Magazine, which will come out six times a year. The tone of the new publication will most likely mimic Catster’s online presence and tone. When I talked to Susan Logan-McCracken about the new magazine, I joked that it sounded like it will be “Cat Fancy Light.”

As Susan wrote so eloquently about the new magazine in her final editorial in Cat Fancy’s final issue, “It will still be a voice for all cats and people like you who love them. Cherish life. Celebrate love and things that never change. But embrace transformation, for without it, there’s no growth or progress.”

I’m trying, Susan. I wish I-5 much success with Catster Magazine. But as I’m reading this beautiful final issue of a magazine that has been such a significant part of my life, I can’t help but shed a tear or two. The cat world won’t be the same without Cat Fancy.

53 Comments on A Farewell to Cat Fancy Magazine