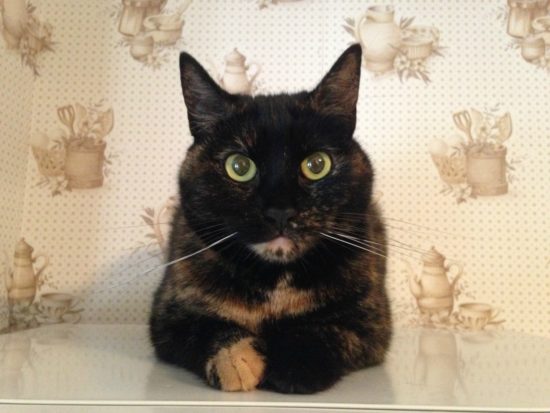 While reading Jackson Galaxy and Kate Benjamin’s new book, Catification: Designing a Happy and Stylish Home for Your Cat (and You), I found myself re-evaluating every room in my home, making small changes as I went along, and taking notes for more complex projects that I want to tackle in the future. I also discovered at least three areas that needed immediate catification improvements.

One of those was my kitchen. My microwave is located on top of a cabinet that puts it at about eye level. I used to use the top as storage for random items, until Allegra knocked off a Mighty Bright Reading Light which I’m sure was very satisfying to her when it hit the floor and shattered into a million little pieces. The fact that it broke was, admittedly, entirely my fault. I had no business leaving it up there.

After that incident, I cleared the top of the microwave, and all of a sudden, it became coveted territory. The girls would both access it from the ledge that separates my kitchen from my dining room, which made a perfect on ramp. The problem was, it was also the only way to exit. This caused a problem when both of them ended up on top of the microwave at the same time. Ruby does not share space willingly. Allegra does not think it’s worth the effort to contradict her in these situations. In this case, Allegra’s only option was to jump off and all the way down to the floor if Ruby was on the side closer to the partition. It’s quite a jump, and even though she’s a young cat, I worried about her joints after repeatedly hitting the floor from that height. 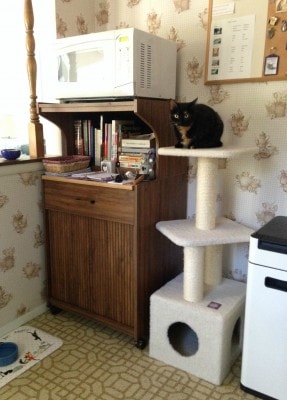 I decided to put a small cat tree next to the microwave. Now their kitchen cat super highway has an on and off ramp. As a bonus, I’ve created additional vertical space for them by making the top of the microwave an acceptable place to hang out. I completed the “project” by putting a fleece pad with a non-skid backing on top. 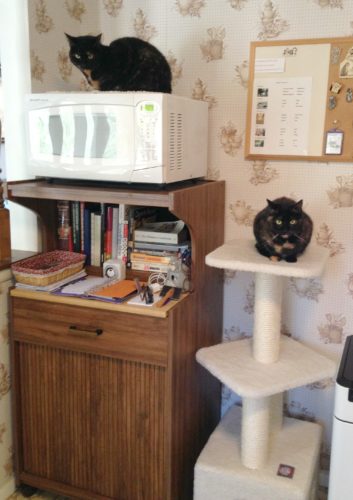 I’m sharing this to show you that catification doesn’t have to be complicated, nor does it have to cost a lot of money, or involve DIY skills, which I don’t have. Sometimes, all it takes is looking at your space with fresh eyes, and letting your cats’ behavior guide you.