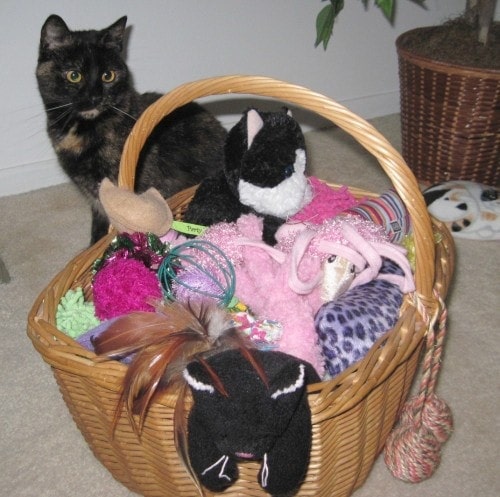 I’m pretty paranoid when it comes to making sure the toys I let Allegra and Ruby play with are safe. We have plenty of “blind and deaf mice” at our house because I remove glued on eyes and ears from toy mice before I even give them to the girls. Toys with rubber bands or elastic are a no-no, and it goes without saying that any interactive, fishing type poles with string are never left out and only used when I play with the girls. Cat toy safety is paramount at our house.

A few days ago, I realized that paranoia can actually be a good thing – apparently, you can never be too vigilant when it comes to keeping your cats safe. One of the girls’ favorite toy is the Go Cat Mouse wand toy. It’s one of the few toys they never seem to get bored with. I’ve had to replace the toy before because the wire became frayed after months of vigorous play, and I wasn’t really all that worried about that, because other than the fact that the toy was no longer usable, it couldn’t have hurt the girls.

But then, the other morning, I saw this: 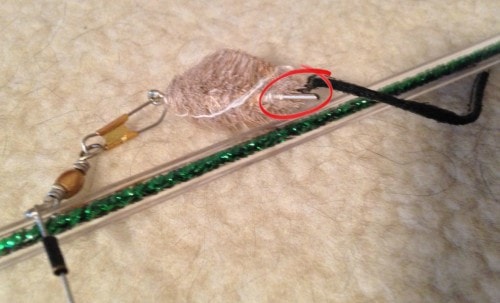 Thankfully, I saw it before I started letting the girls pounce after the toy. This could have ended in disaster, especially since Allegra loves to chew on the mouse. It made me realize that no matter how safe a toy may appear, it’s probably a good idea to inspect interactive toys briefly before each play session, and to periodically take a good look at any other toys you leave out around the house.

Cat toy safety: what to look for

In order to keep your cats safe, inspect toys for any loose pieces that can be ingested. Remove glued on decorations. Remove small external bells (toys with a bell inside are okay unless you have a chewer) and shiny pieces of metal. When choosing cat toys, avoid any toys with small pieces that could be swallowed.

Keep interactive, fishing pole type toys out of cats’ reach when they’re not in use. Cats can become entangled in the string, or even eat and swallow the string, which can cause an intestinal blockage. Inspect toys periodically for any loose pieces, wires, or clamps, especially at the part of the toy where it attaches to the string. Many toys use safety pin-type attachments like the one above, and while they are pretty hard to open (I usually need pliers to pry them open,) it would not be impossible for a cat to chew firmly enough on that part of the toy to get it to pop open.

Don’t let cats play with electronic toys with moving parts without supervision. Depending on the toy, cat paws and whiskers may get caught in the moving parts and your cat may be injured, or at the very least, traumatized.

Some of the safest toys are things that aren’t even designed to be cat toys: milk carton rings, ping pong balls, plastic shower curtain rings, paper bags (with the handles removed) and boxes.

How do you make sure your cat’s toys are safe?