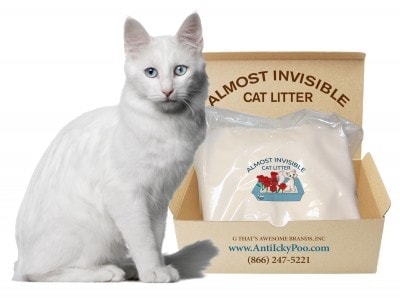 When I was approached by the makers of Almost Invisible Cat Litter, I was intrigued simply by the product name. I was also interested because this product is distributed by http://www.Anti-Icky-Poo.com, the largest distributor of Anti-Icky-Poo (isn’t that a great name?!), which has been my ” go to” cleaner and odor remover for decades. I first started using Anti-Icky Poo when I managed a veterinary hospital, and believe me, we dealt with our share of icky odors and stains.

Since Allegra and Ruby have a bad track record when it comes to accepting alternative litters, I declined to review Almost Invisible Cat Litter, but I wanted to introduce you to this product.

Winner of Pet Product Industry News 2014 Editors Choice in the Litter Category, Almost Invisible Cat Litter is a new product that is designed to solve the three worst aspects of cat ownership: litter box odors, litter box cleaning and dust and litter material being tracked throughout the house. Almost Invisible Cat Litter is designed to eliminate all odors for as much as a month with only 1” of material in your litter pan.

Almost Invisible Cat Litter is a uniquely condensed silica gel that is totally unscented and has a texture and feel similar to natural sand. Cats tend to instinctively want to use this type of litter. It is super absorbent; liquids will not immediately seep down to the bottom of the tray where bacteria will start to grow. Each litter granule will neutralize the urine odors in 20-30 seconds and then hold up to 80% of their weight in moisture. The litter granules do not swell, turn into gummy bears or get sticky and get tracked all over the house. The minimal amount of litter material that does leave the litter tray will not roll or move far from the tray. Those particles can be easily vacuumed or swept up.

Almost Invisible Cat Litter is also virtually dust free. Not only is this healthier for you and your cats, your cats also won’t leave leave footprints in your house after using the box.

Daily maintenance of an Almost Invisible Litter tray is a breeze. Just scoop the solids daily and stir the pan. Additionally, you only need to change the entire pan every 3 to 4 weeks. That saves quite a bit of time and labor.

Almost Invisible Cat Litter is a non-toxic and environmentally sound product. The used litter can actually be used as a fertilizer for bushes and shrubs. Roses will thrive when given the used materials. Almost Invisible Cat Litter is not flushable – never flush any type of cat litter. If you dispose of your used cat litter in the trash, remember to use environmentally friendly biodegradable animal waste bags. 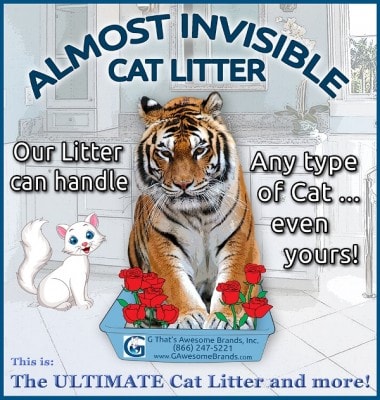 For more information about Almost Invisible Cat Litter and to purchase, please visit their website.