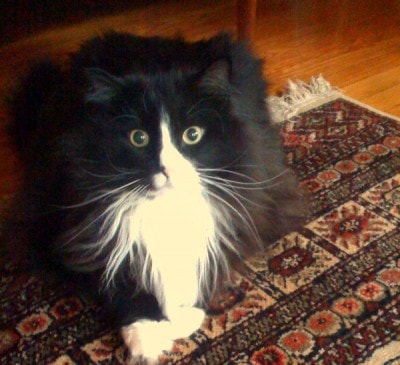 “Do you mind? I was working on something just now.”

“Oh, all right.” Don’t let it be said that Musetta the cat was ever less than gracious, especially as you’ve been so kind to drop by. Let me just stretch a bit. These long naps – excuse me, meditations – can leave my spine a bit stiff these days. Besides, this gives you the opportunity to admire my thick black fur. And see these paws? Yes, they are very white and clean. How very observant of you.

What? No, my name is not Esmé. Nor am I in any way like that particular kitten, who now seems to be the focus of my mother’s Dulcie Schwartz mysteries. Despite what you may believe, if you read her newest, Stages of Grey, I am not the model for Dulcie’s bouncy tuxedo cat, no matter our similarities in coloring or the off-center white star that she has appropriated from my fine velvet nose. Not at all. For starters, at 13, I am now a mature and thoughtful feline, unlike that brash near kitten. Nor do I mouth off, as Esmé is prone to do, claiming privilege and rank. ‘Principessa Esmeralda,’ she calls herself. Principessa indeed. If I were to go on about my exalted heritage, well… it is something a lady does not do.

In truth, if I were going to object to anything, I would be tempted to bring up another issue with my mom’s latest outing. From what I hear – personally, I do not deign to read mysteries – that she has added another cat to the mix. It was not enough, I gather, to have the wise feline spirit of her late, great Mr. Grey guiding that poor human character, Dulcie Schwartz, as she stumbled into more crimes and malfeasance in her academic circle. Nor enough for Dulcie to adopt the so-called Principessa. No, in this latest book, there is yet another cat. A theater cat. A feline who does tricks for a paying audience. Tricks! Like a dog! 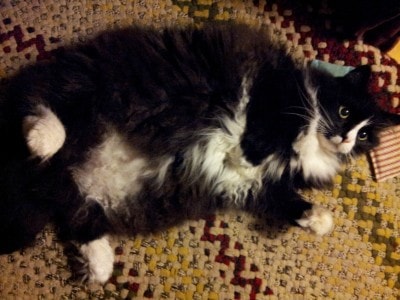 Please, understand. I’m not against theater. Like any of the arts, it is an area in which a feline may excel. I myself was named for the mezzosoprano role in the opera La Boheme, Musetta, and my beautiful, extremely resonant voice can be heard most nights. When I carry one of my objets d’art – the purple mouse, for example – from one room to another, I make a point of announcing its move with an aria that listeners always comment on. In most complimentary terms, of course.

What this new cat – this Gus – does, however, is a different matter. I understand that some felines must labor for a living, and that Gus is a member of a Cambridge theatrical troupe that has entranced Dulcie and her friends. But tightrope walking? Leaping to the stage? It is not seemly, and you would never catch a feline with my distinguished figure demeaning herself so.

In truth, my mother did explain herself to me. Her readers, understandably, expect cats in her books, and so she has been trying to up the feline quotient as her series progresses. With our beauty, grace, and wisdom, we do make natural subjects for all the arts, and I understand that I am her inspiration for all things – although not, I repeat, for that Esmé with her attitude and sense of entitlement. I hear there is another cat in her next book, which is now in progress, and maybe she will better represent the exaltation – the dignity – that I bring to this household. Though I hear she has been outside, recently. Outside… in the dirt! How horrid.

It doesn’t bear thinking about. Which is just as well. My mother says that we felines exist in a state of the eternal present, although I hold that it is my ladylike discretion that forbids me from saying more. For now, I’ll restrict myself to the comments already on the record. And, if you don’t mind, I believe it is time for a nap.” 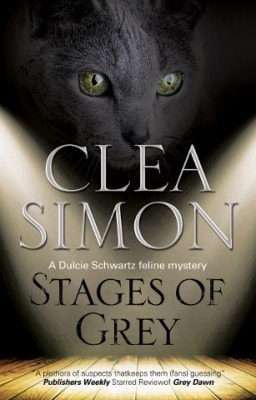 Musetta blogs from the home of writer Clea Simon, the author of three cat-filled mystery series: the Theda Krakow mysteries

. Her latest Dulcie, Stages of Grey, has just been published by Severn House. You can see more pictures of Musetta and read more about Clea on her website, http://www.cleasimon.com or follow her on Facebook or Twitter @Clea_Simon.

6 Comments on A Cat is a Writer’s Toughest Critic