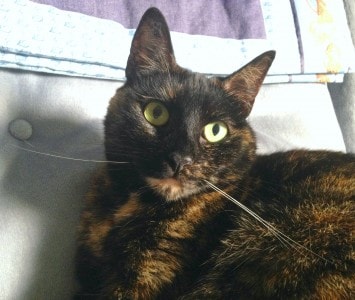 I admit it: I’m a recovering worrier. I have a long history of worrying, and I learned from the master. My dad had elevated worrying to an art form. It wasn’t until the final months of his life when he truly learned to live in the moment. During my last visit with him, when he was already very ill, he told me how he’d learned to “appreciate every flower, and every butterfly.” It sounds trite, but it resonated deeply with me, coming from a man who had spent so much of his life doing the exact opposite.

I was also fortunate that I had a feline master teacher who showed me how useless worrying is. During her illness, Buckley taught me how to stay in the moment and not get ahead of myself with worry. Even on her bad days, she did not waste precious moments worrying about things like a bad test result or a poor prognosis.

And yet, I can’t seem to completely break the habit. I suppose it’s because I’m not a cat, I’m a human with all the flaws and shortcomings of the species.

Worry is a complete waste of precious time. When Karl Pillemer, the author of 30 Lessons for Living: Tried and True Advice from the Wisest Americans, interviewed 1200 elders for his Legacy Project, he heard over and over again that the one thing most people regretted was the time they wasted worrying about the future.

Not too long ago, I had a pretty poignant reminder of this, courtesy of Allegra and Ruby.. I’ve been dealing with some ongoing home repair issues that I had been neglecting. I was really worried about the extent and cost of the needed repairs, and had been pulling a “Cleopatra” for a while, but reached a stage where I could no longer ignore the problem. Now mind you, I spent an amazing amount of time worrying about these issues before I even had my trusted handyman look at the problem. I also always worry about Allegra and Ruby anytime a service person comes by the house. They don’t like being locked up in a room, and the hammering and drilling that often accompanies repairs frightens them.

Thankfully, my handyman is  a cat guy, and while Allegra and Ruby always greet him at the door, once the hammering starts, they disperse to their various hiding places. For Ruby, that’s usually under my bed, for Allegra, it’s either inside the kitchen cabinet, under the sofa, or in behind the shower curtain in the downstairs bathroom. So really, there was no need for me to worry about the two of them – and yet, I did it anyway.

Turns out the needed repairs aren’t going to be nearly as daunting as I had feared. We’ll start addressing them one item at a time, and everything will be taken care of soon.

But what this brought home to me once again was what a giant waste of time worry is. I’m going to try to remember this experience the next time I get caught up worrying about something. And I’m also going to try some of these:

Don’t make it longer than 5 or 10 minutes, and try to do it at the same time every day. During that period of time, you can worry about everything and anything you want. Let yourself go crazy. Imagine the worst case scenario. But that’s the only time of the day you get to do that. The rest of the day is a worry-free zone. If any thoughts of worry come up during the day, jot them down, then let them go. Remember, you can worry about them during your worry period.Chances are that after a few days of doing this, you’ll realize how pointless worrying is, and those 5 to 10 minutes will seem like a ridiculously long amount of time.

How many times do things really turn out as bad as you feared? It’s kind of like the man who said: “Don’t tell me worrying doesn’t work! Almost everything I worry about never happens to me!”

Accept that you’re not in control

Thinking about everything that could go wrong doesn’t make life any more predictable. Sometimes, things just happen. You may not be able to control the situation, but you CAN control how you react.

Cats don’t know how to worry. They live in the moment. Something either feels good, or it doesn’t. If it does, they’ll let you know it so you can change it for them. Now who’s the smarter species?

Are you a worrier? What has helped you break the worry cycle?

26 Comments on Conscious Cat Sunday: The Waste of Worry