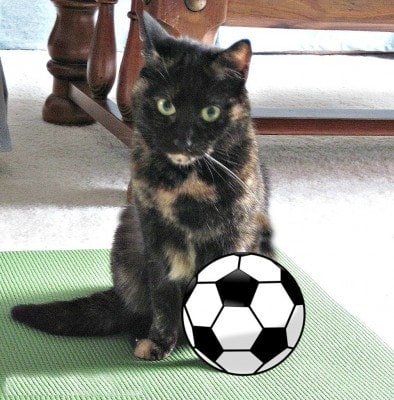 It’s funny how sometimes the things you’d least expect to bring back childhood memories are exactly the kinds of things that do. I’m not a big soccer fan these days, but you’d have to live under a rock to not be aware that the World Cup is happening in Brazil right now. And as the US team is getting ready for its second game of the tournament today, I found myself traveling down my own personal soccer memory lane.

I grew up in Germany, where soccer is huge. Soccer is to Germany what baseball is to America. I was a big fan when I was growing up, and especially during my teenage years – years that were peppered with crushes on famous soccer players like Gerd Mueller and Jürgen Klinsmann, the current head coach of the US soccer team (looking at him now, I’m not sure why, but he was awfully cute as an eighteen-year-old!) My parents and I attended almost every home game of our local minor league team, the Stuttgarter Kickers (which, as it happens, is where Klinsmann’s professional career started.) As your typical teenager, with all the drama that phase of life entails, attending soccer games was one of the few things we still enjoyed together as a family.

When I moved to the US thirty years ago, soccer wasn’t all that popular yet. It has, of course, become a sport that is holding its own over the last few decades; according to Wikipedia, it’s the third most played sport in the US. With apologies to my German heritage, I find football to be a much more exciting sport, but this year, the World Cup games have caught my interest again for some reason. Maybe it’s because I was ready for that trip down memory lane.

It occurred to me that soccer is the ideal sport for cats. It doesn’t require special equipment, the rules are a bit obscure, and it’s fun. And, as the cats in the video below demonstrate, it’s super easy for you to set up a feline World Cup in your home:

So, while I wouldn’t want to go back in time for anything, I’m going to enjoy my World Cup memories. And I may just set up an indoor soccer field for Allegra and Ruby.

What about you? Are you following the World Cup?