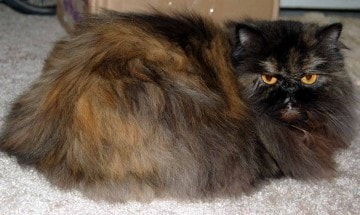 Polycystic kidney disease (PKD) is an inherited condition in which small, liquid-filled cysts develop on the kidneys. These cysts multiply in number and grow in size over time. The increasing size eventually takes over healthy kidney tissue and can lead to potentially fatal kidney failure.

Genetic predisposition for some breeds

Even though this disease has been reported for decades, there is no explanation for why these cysts develop, except for a genetic anomaly that is seen primarily in Persians, or in breeds that have Persian genetics in their line, such as Himalayans.

PDK can be diagnosed in kittens as young as 6 months old, but symptoms typically don’t show until cats are older. Symptoms are similar to those for other types of kidney disease and include:

The only way to definitely diagnose PKD is via ultrasound. Ultrasound will be 98% accurate after ten months of age, even though the cysts can develop in younger cats.  The cysts won’t show up on radiographs. “You can have one large cyst or 30 or more small cysts,” says Richard Goldstein, DVM, associate professor of small animal medicine at Cornell University’s College of Veterinary Medicine on the Cornell Feline Health Center website. “In an advanced stage of the condition, it’s possible for the sacs to become so large and numerous that you can actually see the kidney’s outline when an affected cat is lying on its back. When you examine the animal, the kidney will seem to be unusually large, but you may not be able to actually feel the stones because they’re on the interior wall of the organ.” Eventually, however, the cysts may become so large that their bulging distends the kidney’s surface and can be felt during the course of a veterinary examination.

There is no way to surgically remove or drain the cysts, so treatment is the same as for kidney failure in general: a combination of diet, fluid therapy, medications and supplements.

There is no cure for PKD. Prognosis varies from cat to cat, depending on how many cysts are present and how large and how quickly they grow. Cats who have only a few small cysts may live well into their teens and die from something unrelated to PKD. Cats with multiple, large, and fast growing cysts may die at an early age.

The Veterinary Genetics Laboratory at UC Davis offers a DNA test for PKD. Cat guardians collect a sample from inside the cat’s cheeks and submit it to the lab for testing. All Persian cats should undergo this test. If they carry the gene, they must not be allowed to breed. Knowing that a cat carries the gene may also allow cat guardians to start supportive treatment sooner rather than later.

Kidney Failure and Diet in Cats

RenAvast: A Solution for Chronic Renal Failure in Cats?