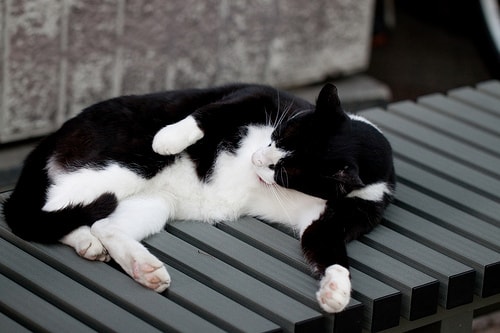 Excessive grooming in cats is also called psychogenic alopecia. Alopecia is the partial or complete absence of hair from areas of the body, psychogenic means having a psychological rather than a physical cause or origin.

Excessive grooming is one of the most common obsessive compulsive disorders in cats. What cat guardians typically notice is bald patches on a cat’s belly or the inside of her legs, but the areas can also extend to the flanks, tail and other parts of the cat’s body.

The obvious signs of excessive grooming are compulsive licking and chewing, but frequently, cat guardians won’t even see their cats exhibit the behavior while they’re watching. Cat guardians may notice bald patches or areas where the hair is chewed down to a stubble. In extreme cases, cats will self-mutilate and create open sores that will be prone to infection.

Cats spend 30-50% of their day grooming, and, of course, grooming in itself is normal behavior, so cat guardians frequently won’t notice that anything is wrong until a cat has already chewed herself bald or created sores.

Excessive licking can have a number of causes. Cats will lick an area if it is itchy or painful. If the licking is caused by pain, the affected area will typically be small, while itching will cause a cat to lick or overgroom a wider area. The location of the bald areas may provide some clues as to the cause, but unfortunately, this is not always reliable. Typically, baldness around the tail head may be caused by fleas, while cats with pollen or food allergies may lick their flanks or abdomen. Excessive grooming can also be caused by cystitis, hyperthyroidism, and anal sac problems.

Overgrooming can be the result of stress.

When stress is the culprit

If medical problems have been ruled out, the most likely cause for overgrooming is stress. Grooming is a self-soothing behavior that calms and comforts the cat. If the cat is under constant stress, this behavior becomes compulsive.

Cats are creatures of habit who don’t like their routine disrupted, so anything from the loss of a family member to a piece of furniture being moved can cause stress for cats. Some cats are more prone to stress-related behaviors than others.

How to help cats who groom excessively

Once medical issues have been ruled our or addressed, treatment needs to focus on helping the cat deal with stress.

Excessive grooming can take quite some time to resolve, and will require patience and understanding from the cat’s guardians.

36 Comments on Excessive Grooming in Cats