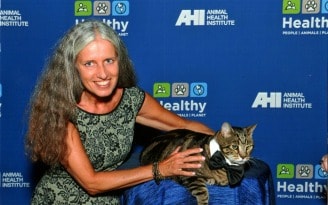 Last Wednesday, I attended a very special event on Capitol Hill:  the 17th Annual Pet Night, sponsored by the Animal Health Institute. This year’s celebrity was none other than Aragon, the cat who plays Lord Tubbington on the hit TV show Glee.

I was looking forward to meeting this beautiful Bengal cat. This would be my first real life encounter with a celebrity cat, but I have to admit, I couldn’t decide what was more exciting: meeting Aragon or getting a press pass for an event on Capitol Hill!

The event was held at the Cannon House Office Building. I’ve lived in the Washington DC area for almost 30 years, but I had never been inside one of the congressional office buildings, and let me tell you, it’s quite impressive. But never mind all the pomp and circumstance of federal government: I was eager to meet Aragon!

I entered the Caucus Room, where Pet Night took place, along with a handful of other members of the media, and there he was. Stretched out on an elevated table, attended to by his human mom, CeCe Card, it looked for all intents and purposes like he was holding court. As befitted the occasion, he was wearing a bow tie on his collar. He looked completely relaxed, and maybe even a little bored, as he surveyed us media types, wielding cameras and note pads. 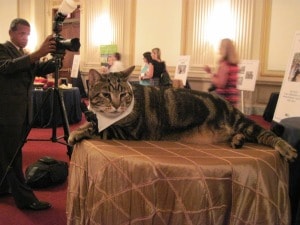 How did this handsome boy become a celebrity cat actor? His mom probably couldn’t have known what was in store for both of them when she rescued the then one-year-old cat from a Bengal rescue facility in Maryland in 2005. CeCe was on a trip to New York at the time, and took him back to California with her, where he now makes his home.

CeCe recognized his special energy and high level of curiosity at a very young age, and nurtured these traits by taking him on walks through her neighborhood. Eventually, she started taking him everywhere: crowded malls, movie sets, and airports. Nothing seemed to phase this unique cat.

One day, a friend of CeCe’s who works with pets who perform in movies suggested that Aragon would make a great actor. And the rest, as they say, is history.

But Aragon doesn’t just utilize his special talents in the glitz and glamour of Hollywood. He is also a certified therapy cat who visits hospitals and other facilities. I knew I was in the presence of a true healer cat as soon as I saw him; he radiates a powerful energy. CeCe, an energy healer herself, considers everything Aragon does healing work, even his work on Glee. After all, she says, “he’s bringing so much joy to so many.” 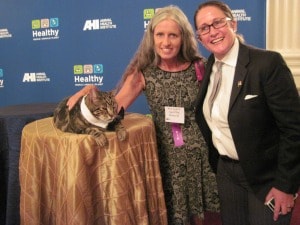 Not surprisingly, most of the media questions were about Aragon’s performance on Glee. “Aragon is treated like a God on the set,” said Cece. “Everyone on the set has so much respect for him.” Clearly, the Glee cast and crew understand that this is the only proper way to treat a cat! CeCe, who described herself as “a dog lover who has a cat who acts like a dog” said that working with cats requires patience and understanding. Aragon has two trainers, and CeCe is always on standby as well. Much of the time, he does better with her on the set than without her. “When Aragon is doing his scenes, it’s so quiet, you could hear a pin drop,” said CeCe. “Heather Morris ( the actress who plays Lord Tubbington’s human Brittany) is really great with him.”

And what does Aragon think of his work on the show? According to CeCe, “Aragon thinks of himself as the George Clooney of cat actors.” All I can say is: George Clooney, eat your heart out. I would choose Aragon over George any day.

I always worry about these high profile cats at public events: would they really be doing these public appearances if they had a say in it? How stressed do they get? I needn’t have been concerned about this with Aragon. I never felt that he didn’t want to be there. If anything, he seemed rather bemused by all the fuss that was being made over him. He is one of the mellowest cats I ever met. For two hours, he posed for pictures with members of Congress and their staffers (there were about 700 people in attendance), and with the exception of a few times toward the end, he was completely relaxed – and this was after a full day of touring Capitol Hill and meeting and greeting people! 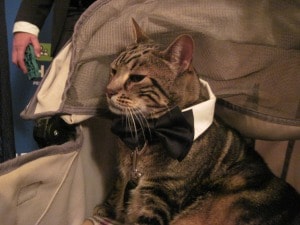 CeCe is very much in tune with his needs, and makes sure he gets breaks when it all gets to be a bit much for him. Toward the end of the evening, Aragon started getting visibly tired, and CeCe called a halt to the photo opps and gave him a break in his “car” (a stroller with a mesh cover) behind a screen, away from prying eyes.

I also got a chance to chat with CeCe about Aragon’s appearance on a recent episode of Animal Planet’s My Cat From Hell. CeCe and her partner Krista had combined households at that time, and Krista’s cat Bea was having some issues with both CeCe and Aragon. Jackson helped restore peace between cats and humans. He also suggested that Aragon should probably lose a little weight. At the time, he weighed in at 23 pounds. Jackson recommended a grain-free canned diet. In addition to the diet change, CeCe took him for two 10 minute walks each day, and they used a cat wheel to get him to exercise even more. Three months later, Aragon was down to a svelte 20 pounds. 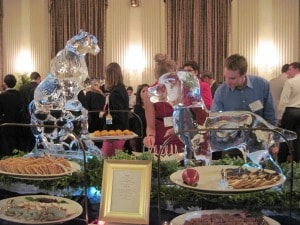 I had a fantastic time hobnobbing with members of Congress, enjoying the incredible food, and repeatedly pinching myself because it seemed surreal that I was really at an event on Capitol Hill. But what I enjoyed most about the evening was watching the bond between CeCe and Aragon: it is absolutely incredible. The energy coming off both of them was pure love and connection.

In the end, that’s what it all comes down to, celebrity cat or ordinary house cat: the love between a cat and his human, and the magic that happens as a result of it.