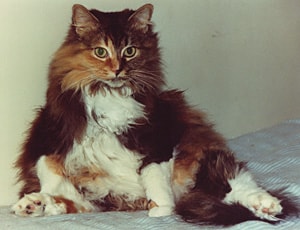 Have you ever noticed that the cat who is scheduled for a vet or groomer visit is nowhere to be found when it’s time to go? Most mornings, you’ll find our cats curled up in their cozy beds or hanging out in the lap of an overstuffed chair. I walk into the room often and give them a little hug or ruffle up the fur behind their ears. They love the attention. Except when I approach them with an ulterior motive. Then they scurry for parts unknown and the chase is on. How do they know when a car ride is imminent? Maybe this story will shed some light on the mystery.

It was not on Daisy’s agenda that hot summer day to see the groomer. She, no doubt, planned to loll on the linoleum floor, occasionally sauntering over to the closest window to watch the blue jays feed. She didn’t know I’d arranged for a bath and a flea dip. Or maybe she did.

This was in the 1980s, before spot on flea products, and Daisy was supporting a good number of California’s enormous flea population. This was also the time of year when her long calico winter coat shed and tangled with her summer coat, causing mats.

I lugged the heavy wire and wood cat carrier from the garage and discreetly placed it just outside the back door. Rule number one: Don’t let the cat see the carrier or you’ll never get her near it.

“Oh, there you are, girl. Come to Mama,” I crooned as I casually walked into the back bedroom.

She looked up at me with sheer terror in her eyes and quickly disappeared under the bed. “How does she know?” I wondered. I probed the darkness with my hands where only dust bunnies and frightened cats go. But Daisy avoided capture.

When she thought the coast was clear, she crept out from under the far side of the bed and slunk down the hallway toward the kitchen. The gig was up—there was no place else for her to hide out of my range. This is going to be easy, I thought. But the cagey cat outsmarted me again. Hugging her belly to the floor, she scurried into the living room. I followed her just in time to see her silky tail disappear under a corner table. The little scamp had managed to position herself a scant few inches from my longest reach.

I knew full well that a cat that doesn’t want to be caught is usually a cat that won’t have to go to the groomer. Then I remembered something I’d read recently about using mind talk with animals. Could I communicate with Daisy through thoughts like J. Allen Boone talked about in his book, Kinship With All Life? Could I convince her to adopt my point of view? What did I have to lose except, perhaps, a measure of dignity?

I brought the carrier in, set it in plain sight and opened the little door. Then I sprawled tummy down on the floor and looked through the dimness under the table into Daisy’s large sea green eyes. She stared back and I immediately began creating mind pictures. I visualized the plump calico standing up and walking toward the carrier, which sat empty a few feet away from me. I envisioned her stepping into the carrier, and then my closing the door and latching it behind her. I pictured the two of us going by car to the groomer where she would be lavished with attention. And then I created images of bringing her home flea-free, mat-free and just feeling wonderfully comfortable.

To my amazement, the moment I completed this mind-video, Daisy stood up, walked over to the carrier and, without hesitation, stepped inside. I lay there stunned—in disbelief—as she moved to the back of the carrier and turned around until her tail was free of the little wooden door. Then she sat down and looked over at me as if to say, “Well, close the door and let’s get on with it.”

Off we went to see the groomer—me still in a state of shock and Daisy sitting silently by my side. That’s another curiosity about the situation. This was the first car trip I ever remember taking with Daisy that she didn’t sing at the top of her lungs the entire distance.

One has to wonder if this amazing moment would set a precedent for future outings with Daisy. In a word, no. The cat carrier caper was never repeated.

A slightly similar experience occurred years later, however, with another lovely cat. Rosie was only about four years old when she fell tortuously ill. It was about half past midnight when her screams woke me. I stumbled out of bed and found her in trouble—serious, painful trouble.

I thought she had fallen from the kitchen counter, for she lay writhing on the floor beneath it crying in pain, crying, perhaps, for me. In fact, I know she was crying for me because, when I arrived, the crying became much less intense.

Rosie could not move. It appeared that her back legs were paralyzed.

I rushed to get the cat carrier, set it near her and began to imagine how I would bundle her into it without causing her more pain. In the meantime, the emergency vet in the next town was waiting for us.

It was Rosie who put my fears to rest. Did she know that the carrier promised hope? Or did she understand her fate and welcome it? I can only guess the secrets of her mind because what happened next was outside the realm of predictability. I watched as the little cat began to crawl determinedly toward the carrier. She reached out with her front paws and pulled and pulled her way toward the carrier inch by painful inch. Once inside, she positioned herself so that her tail was clear of the door.

“I’m afraid this is serious,” said the young veterinarian after he’d examined Rosie. “I suspect that she has suffered an aneurysm and I recommend that we put her down—she’s in a lot of pain.”

It was still raining when I walked out of the animal clinic carrying the empty cat carrier and only memories, now, of beautiful Rosie. If tears give flight to beloved pets who must leave us for the world beyond, Rosie was soaring high that early morning.

6 Comments on Mind talk and cats: Daisy and the cat carrier caper