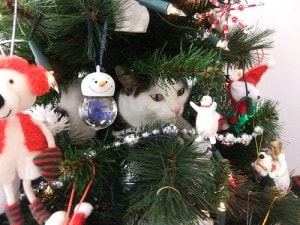 T’was the night after the adoption event,
And all through the store,
Not a creature was stirring, not even a stray cricket on the floor
The Center Coordinators were all snug in their beds
Thinking of ways to move adoptions ahead.

The cage cards were hung on the enclosures with care,
Each telling the story of the cats who were there.
Poor Fluffy, poor Mittens, Whiskers and Sprite
Abandoned and alone on this cold Post-Adoption night.

Each cat was nestled in a Maddie’s Blanket, and thought twice,
I wasn’t naughty, I really was nice.
Why was I left in a shelter,
Almost about to pay the price.

When out in the store, there arose such a clatter,
All the kitties stood, stretched, took a lap of water, nibbled some food, groomed themselves for a moment,
And looked to see what was the matter.

When what to their wondering eyes should appear,
But an old, tired-looking volunteer.
She was clothed in Lost Dog blue, from her head to her toe,
Her T-shirt full of claw holes, her hair the color of snow.

There was fur on her clothing,
A cat toy behind her ear,
She had catnip in her pockets,
On her sleeve, an unidentified smear.

“Look at you kitties, stuck here for the night!
This will not do, this is not right!
Come Scruffy, Come Midnight, come with me all,
I’m taking you home, we’ll have a ball!”

“We’ll play with felt mousies,
We’ll eat lots of treats,
I’ll brush you and comb you,
And nibble on your cute little feets!”

She gathered some carriers, and began to pack them all,
When a little grey kitten, who was rounder than tall,
Asked her a question, with a mew quite small:

“Are you our adopter, are you taking us home?
Will you love us forever, and ever, when we’re combed?”
The volunteer sat down, in her eyes there was sadness,
But then, in a twinkle, the kittens saw gladness!

“No! I’m just your foster, though I’m taking you home,
It’s only for the holidays, where you will roam,
Free of these cages, it will be fun.
And after the weekend, when we’re all done,

Back to the store, we will be on our way,
But this time, with you I will stay.
I’ll tell the adopters that once in their home,
You’ll be fabulous cats, when you’re all grown,

For you’re with Lost Dog now, you’ll always be safe
You’ll find love, You’ll have a great place,
You’ll always be cared for, even if things go wrong,
But they won’t, because our counselors are strong.

They’ve been well trained in interviewing,
They know what to do,
To find perfect forever homes,
For each one of you.”

So with her they went,
Out to her car,
Though it was cold,
It didn’t seem far.

And then each one found a home
That was good and was right,
And as they left the store, one and all.
They thought they heard the volunteer call

“Merry Catmas to all, and to all a good life!”

This adaptation of Clement Clarke Moore’s poem was dictated to Harry Shubin by the Ghost of Catmas Future on a dark winter night.

Harry Shubin is a patent attorney in Northern Virginia who has been active in cat rescue for most of his life. He shares his home with seven cats. His entire family, including his wife Julie, daughter Rachel, who is the publisher of the Sandpiper Cat Blog, and son Michael, are also involved in cat rescue.

22 Comments on The Night Before Catmas: The Adoption Version