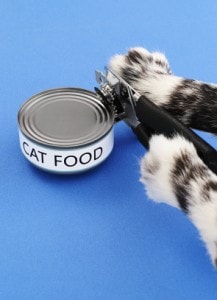 I don’t eat a lot of things that come out of cans. Allegra and Ruby eat mostly raw food, and the occasional canned food they eat comes out of the little flip top cans. So why is it that when I used a can opener the other night to open a can of lentils, both of them came running, even though they had just finished their dinners?

Is it possible that responding to the sound of a can opener is hard wired into our domestic cats’ brains?

Allegra was rescued from a Maryland shelter when she was two or three weeks old and lived in a foster home until I adopted her at the age of seven months, so I suppose it’s possible that she heard the sound of a can opener during the first few months of her life and learned to associate it with food. Ruby was found in someone’s back yard when she was four months old and lived in a foster home for five more months before I adopted her. Even though she didn’t eat canned food in her foster home, the two resident cats may have been eating it.

I suppose it’s possible that both girls did learn to associate the sound of a can opener with food at such an early age that it stuck with them. But, even if that was the case, it still surprised me that, after having lived with me for one and a half and two and a half years, respectively, and never once having been served a meal out of a can that needed to be opened with a can opener, they would still come running at the sound of one.

Do your cats respond to the sound of the can opener?

48 Comments on Cats and can openers