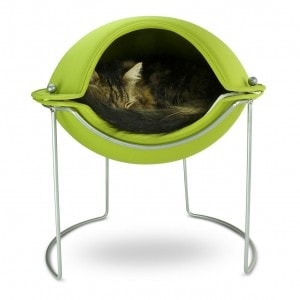 Do we have a fantastic giveaway for you today! The Hepper® Pod Bed is one of the most unique cat beds I’ve seen. It not only offers privacy for snoozing, hiding, or plotting world domination, it’s also a stylish addition to your living space.

The Hepper® Pod Bed is made from a soft-touch flexible molded foam with fabric laminated on both sides. The raised platform offers a view and helps keep your kitties as warm or as cool as they want to be. It comes with a removable microfiber interior pad. The Hepper® is best for cats around 10-12 pounds that can jump into the opening, but larger kitties can enjoy the Hepper as well: the top is removable. 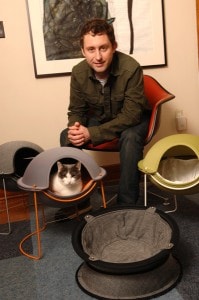 I love the story behind the Hepper® company. The company is named for a spunky cat who came to live with owner and award-winning industrial designer Jed Crystal in New York City. According to Jed, Hepper appeared one day and was put to work as the official rat-cat in a shoe store in SoHo. Soon her sense of curiosity (she’s a cat, after all) led her to explore all of the floors, walls and crawl spaces in the building, and eventually she ended up squeezing out of the ceiling on the fourth floor. She was quickly “rescued” into a tiny flat and spoiled on treats. Proving to need more room to roam, she moved to Vermont with Jed and was soon nicknamed Hepper (short for Hepburn, as in Audrey, as in elegant, beautiful and oh-so stylish). Hepper confirmed this new moniker by showing off her little grey hat and shawl (OK, patches of fur) against her brilliant white coat. Hepper is now the official tester for all Hepper® products.

For more information about the Hepper® Pod Bed, and Hepper®’s other fabulous products, please visit the Hepper® website.