Kitten Associates is a Connecticut based rescue founded by Robin Olson in 2010. You’d be hard-pressed to meet someone who is more dedicated to saving cats’ lives than Robin. The group’s mission is to save the lives of cats (and dogs, too!), support animal rescue organizations with powerful online marketing tools, and champion legislation for spay/neuter programs to end pet overpopulation.

Kitten Associates also happens to be the rescue group I designated as the recipient of the $1000 prize money for the 2012 Petties. Pettie winners will be announced during a virtual ceremony on October 12. 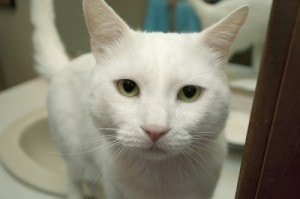 Yes, Kitten Associates named this cat after Jackson. Jackson the cat was rescued from a Kill shelter in the southern US before his “time was up.”  He’s a gentle giant in pure white fur.  He has a sweet demeanor and gets along well with other cats, dogs and humans alike.  Jackson was adopted shortly after we rescued him, but his new family reported that Jackson was getting beaten up by the other cats in the home so they returned him.  This sweet kitty needs a true forever home and we’re determined to find one for him. Jackson is about 2 years old and like all our cats, is fully vetted and microchipped. Visit Jackson on Petfinder.

Shop and help cats at the same time – a winning combination for sure!

Two products that I never want to be without are Stress Stopper (I even take it myself!), which is great for any and all stressful situations such as trips to the vet, thunder and lightning, fireworks, parties, vacuum, lawnmower, machinery, visitors and houseguests. I also like to always have Storm Soother on hand. It has made a big difference for Allegra, who used to be terrified of storms.

You may also want to take a peek at the many fantastic toys recommended by Jackson Galaxy.