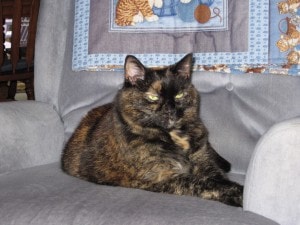 Purring is usually considered a sign of contentment, but there’s more to a cat’s purr than meets the ear.

While there are a number of different theories of how cats purr, the consensus among researchers seems to be that purring is the result of signals from the brain to the laryngeal and diaphragmatic muscles. Cats purr during both inhalation and exhalation with a consistent pattern and frequency between 25 and 150 Hertz.

Even though cats do purr when they’re content, purring can also be a sign of stress. Cats also purr when frightened or injured. In these situations, purring appears to function as a self-soothing mechanism.

Researchers at Fauna Communications found that the frequency of a cat’s purr covers the same frequencies that are therapeutic for bone growth and fracture healing, pain relief, reduction of swelling, wound healing, muscle growth and repair, tendon repair, and mobility of joints. It seems that with the purr, nature provided cats with their own built-in healing mechanism.

Purring doesn’t just heal the cat herself. Numerous anecdotal reports of cats being intuitively drawn to an injured area are testament to the healing power of the purr. But even without scientific evidence, who would argue the soothing quality of a cat’s purr?

Amber, shown in the photo above, purred more than any other cat I’ve ever known. She’d purr if you so much as looked at her. To this day, I miss her loud, almost constant purr. Buckley never purred while she lived at the animal hospital, and it was not until several months after she came home with us that I first heard a very faint purr from her. Allegra didn’t purr at all during her first year. Now I occasionally hear a faint purr from her, and it makes my heart smile each and every time. Ruby purrs loud and often – I think she’s trying to follow in Amber’s pawsteps.

Does your cat purr?

36 Comments on What is purring?