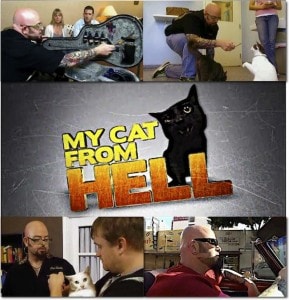 If you’ve been going into My Cat From Hell withdrawal, your wait is almost over: Jackson Galaxy returns to Animal Planet with ten new episodes of the hit show on June 30.In this new season, for the first time, Jackson is taking his skills and signature guitar case filled with cat toys on the road to New York City.

As we’ve seen in the two previous seasons, it’s often the humans in the household that need Jackson’s help far more than the cats. “Each cat has a distinct personality and temperament and the actions of humans can easily lead to a claw in the face,” says Galaxy. “Dealing with these out-of-control cats can be easier than dealing with out-of-touch owners, and fixing people first can often be the cure all for feline vexations.”

I can’t wait for the new season to start. In the meantime, if you need a “Jackson fix” and haven’t already bought his new book, Cat Daddy: What The World’s Most Incorrigible Cat Taught Me About Life, Love, and Coming Clean, reading the story of Benny and how he became Jackson’s teacher and ultimately saved his life will hold you over quite nicely. I’m currently listening to the audio version of the book, read by Jackson, and it’s (almost) like having a conversation with the Cat Daddy himself.