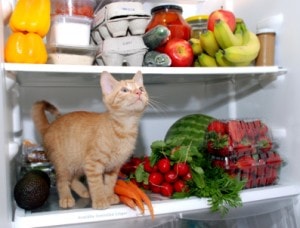 Cats are obligate carnivores, and they need meat not just to thrive, but to survive. Most cats prefer a diet heavy on meat, poultry, or fish. As carnivores, they don’t need carbs, so they really shouldn’t even like things like vegetables or fruit. And yet, there are cats who love asparagus, cantaloupe, pumpkin and all sorts of other strange foods.

Additionally, according to a  report from Scientific American, cats lack the ability to taste sweetness, unlike every other mammal examined to date. And yet, there are cats who love things like ice cream and flavored yogurt.

Cats have a reputation for being finicky eaters. But maybe that’s just what they’d like us to think? Maybe they just have a hankering for something a little different on those days when they turn up their little noses at what’s in their bowls?

My first cat, Feebee, loved almost everything that was people food. I blamed my former husband for this: he would feed him table scraps of everything that he ate himself, and Feebee rarely declined an offering. Some of the stranger things he liked were melon, lettuce coated in salad dressing, and just about any kind of cracker. Virginia, my first office cat at the animal hospital, loved yogurt, especially the flavored kind. Peach was her favorite.

Amber and Buckley didn’t care for people food – most likely, because they were never offered any. Allegra and Ruby don’t eat people food, either. I never gave it ot them, and with a few exceptions, they show very little interest in anything but their raw food and their freeze-dried treats. Allegra likes to taste-test my morning smoothies. Banana usually gets a paws up; berries – not so much. I add greens to my smoothies, and on days when I go a little too heavy on the spinach or kale, she scrunches up her little nose and walks away. The only time Ruby is even remotely curious about people food is on the rare occasion when I eat fish at home.

Any of these strange foods are probably okay for your cat, as long as it’s a tiny piece, and only an occasional treat. If you have a cat who, against what science tells us, has a sweet tooth, be careful that you don’t let her get into any products sweetened with Xylitol, which, even though it is a natural sweetener that is safe for humans, is highly toxic and even deadly to pets. Unfortunately, it’s also found in anything from flavored yogurt to chewing gum to mouthwashes.

But I want to hear from you. What strange things do your cats like to eat?

51 Comments on Does your cat have a food fetish?