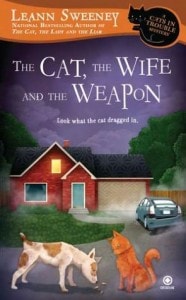 I’d been looking forward to The Cat, The Wife and The Weapon. I love reading cozy mystery series, especially when they feature cats. To me, reading books that are part of a series is like having a joyful reunion with old friends that you only get to see once a year.

This fourth book in Leann Sweeney’s Cats in Trouble series once again features cat quilter Jillian Hart and her three cats Merlot, Chablis and Chiraz, along with her human friends, who all live in the small town of Mercy, South Carolina.

The first thing I did, as I do with most books, was read the plot summary on the back cover:

When quilter Jillian Hart returns to her lake house in Mercy, South Carolina, she discovered her friend, Tom, is missing-and his estranged half-brother has moved into Tom’s house. Jillian doesn’t trust the guy, especially since he allowed Tom’s diabetic cat to escape. When police officers find Tom’s wrecked car with a dead stranger inside, Jillian is determined to find out what happened to Tom-before someone else turns up dead.

And then I couldn’t believe my eyes. As most books do, this one featured a couple of “blurbs” about one of the previous books in the series. One of them sounded an awful lot like something I would say about one of Leann Sweeney’s books:

“Tightly plotted, with likeable characters, and filled with cat trivia, this entertaining mystery will become a favorite for cozy and cat lovers alike.”

Then I saw the words “The Conscious Cat” underneath the blurb. Talk about being surprised! The words were an excerpt from my review of The Cat, The Lady, and The Liar. I am delighted and honored that one of my quotes was selected for the back of this book.

I thoroughly enjoyed this new latest installment in the series. You just can’t help but love Jillian Hart and her cats. Trouble does seen to find Jillian in this aptly named series, but her cats always come first, no matter what happens in her life. When her friend Tom’s s cat has a diabetic crisis, she sets him up in a spare bedroom in her home until Tom can take him home again. When Tom’s step son shows up with his dog, Jillian acocmmodates both boy and dog at her home, all the while making sure that her cats don’t get upset with all these changes.

Tom’s dysfunctional family is at the heart of this mystery. His estranged half-brother, his mother who is not exactly eligible for a mother-of-the-year award, and his ex-wife who cheated on him with his partner on the police force: they all seem to be implicated in the murder. The family feuds and plot twists made my head spin at times, and kept me reading. Jillian tries hard to keep the peace not just among the animals, but also among all of these diverse characters. The tangled plot builds nicely all the way to the end of the book, when the killer is finally revealed.

Sweeney has done it again. Wonderful cats, interesting characters, and a fast-paced story make this a thoroughly engaging cozy mystery.

Leann Sweeney, a former nurse, has been writing full time since 1980. She lives in Texas with her husband, her three cats Agatha Christie, Archie Goodwin and Indigo, and Rosie, her labradoodle. You can find out more about her and her books on her website.

I received a copy of this book from the publisher. Receiving a complimentary copy did not influence my review.

4 Comments on Book review: The Cat, The Wife and The Weapon by Leann Sweeney