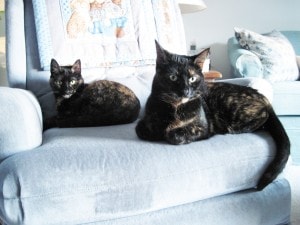 Cloning pets is a relatively new, and very expensive, procedure. It not only raises ethical questions about whether pets should be cloned when there are thousands of adoptable pets in shelters and at risk of being killed, but the few pet owners who have had their pets cloned have come to realize that while the cloned pet may look like their favorite departed pet, his or her personality may be completely different from the original.

While I won’t even try to understand the science and mechanics involved with cloning, I do have a basic understanding of genetics, and I really know tortoiseshell cats. Those of us who love cats with this distinctive coloring also know that they are very unique when it comes to their personalities, often known as “tortitude.” And now scientists are finding that tortoiseshell cats also show the limits of cloning.

IO9, a daily publication that covers science, science fiction, and the future, reported that tortoiseshell cats cannot be replicated, because parts of their genes simply aren’t there anymore.

Cloning a tortoiseshell involves taking the DNA from one cell. Since each of the cells have only one active X chromosome, when a new tortoiseshell embryo is developing using the borrowed DNA, it only has one gene affecting its coloration.

Thus, a cloned tortoiseshell kitten will generally be either black or red. Even if someone were to nab a cell from a developing embryo before the X-linked inactivation happened, the new cloned kitten would also randomly inactivate its X chromosomes, leaving two cloned siblings that don’t have the exact same color pattern.”

The article concludes:  “Life is sometimes determined to be unique, in spite of our best efforts to make it predictable.” And I, for one, am glad that this is the case.

Read the full article on IO9. For a more detailed look at tortoiseshell genetics, visit the Messybeast website.

Would you ever consider having your cat cloned?

Please click on the image above to vote for us for
Best Website About Cats
Only  7 days left to vote – please vote every day!