The cats are taking over TV! After My Cat From Hell with everyone’s favorite Cat Daddy Jackson Galaxy wrapped up a super-successful season and is currently casting for Season 3, another favorite show for cat lovers returns to Animal Planet this Saturday. 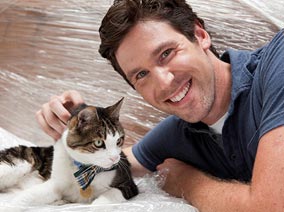 Must Love Cats features songwriting cat enthusiast, John Fulton, as he travels across the country and around the world to meet fantastic felines and their adoring owners, all while writing his infamous “kitty ditties.” On his travels, John meets a daredevil cat that survived a jump from a 20-story window, sees a bionic kitty in action, and watches cats go crazy playing custom smartphone games. In six new episodes, Fulton focuses on feline fun in cities across the U.S. and packs his bags to explore kitty culture in England and Japan for two special international excursions.

I’m particularly delighted that one of the episodes (I believe it is this Saturday’s) will feature Tashirojima, Japan’s Cat Island, where cats outnumber people.

Tune in to Animal Planet on Saturday, March 10, at 8pm Eastern/Pacific for the premiere of Must Love Cats Season 2!

8 Comments on Must Love Cats returns to Animal Planet