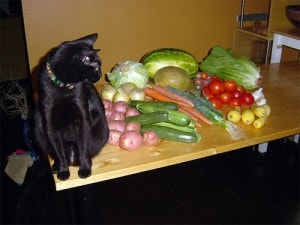 People adopt a vegan lifestyle for a variety of reasons, some of them health related, others as a conscious choice to help the planet. One of the most frequently cited reasons why people become vegan is because of a genuine concern about animal rights. There is no doubt that factory farmed animals live in abysmal conditions both prior to and during slaughter.

I admire people who can completely embrace this way of eating. It’s too restrictive for me, but the evidence I’ve seen, both scientific and anectdotal, makes me think that it is, indeed, a better way to eat. I’m mostly vegetarian, but I occasionally eat fish and seafood, and I do eat dairy. However, more and more, I try to incorporate vegan principles into my diet.

Unfortunately, the increased popularity of the vegan lifestyle presents an ethical dilemma for devoted cat guardians who believe that their cats should reflect their human beliefs about the treatment of animals and an environmentally sustainable lifestyle.

Some pet food manufacturers, most recently Halo, a company co-owned by Ellen DeGeneres, are jumping on the vegan bandwagon and are offering vegan diets for pets. Halo has confirmed that they are developing a vegan diet for dogs only. To date, I’m not aware of any vegan feline diets on the market. Unfortunately, some vegan cat owners insist on preparing a homemade vegan diet for their cats.

As omnivores, dogs are able to survive on plant materials alone, but even they are meat eaters by nature and do best with at least some meat in their diet, so even though dogs can survive on a vegan diet, it is not in their best interest.

Cats are a different story. Cats are obligate carnivores who need meat to thrive and survive. Dietary protein supplies amino acids and is needed for the manufacture of antibodies, enzymes, hormones, and tissues. It provides energy and is essential for growth and development. Protein derived from meat and poultry contains ample amounts of these essential amino acids. While vegetable and grain based proteins provide amino acids, cats, unlike dogs, lack the enzyme required to process them metabolically.

Another significant difference in nutritional requirements is cats’ need for taurine, which is important for proper functioning of the heart. Meat is a natural source of taurine; it is not available in plant tissues. Dogs can make their own taurine, but cats cannot. Commercial cat foods did not contain this important amino acid until 1987, when veterinarian Paul Pion identified the link between a lack of taurine in cats’ diets and feline dilated cardiomyopathy, a fatal heart disease that has been largely eliminated in the pet cat population since then.

Proponents of vegan pet diets claim that there are ways to obtain these nutrients from plants, or synthetically. These claims are mostly based on studies done for humans, and don’t take the unique biology of cats into account.

A vegan diet simply doesn’t make sense for cats. Why go against nature? A cat’s natural diet in the wild consists of mice and birds, both of which are almost all protein. The only vegetables cats eat in nature are the contents of their prey’s stomach.

No matter what your reasons for being vegetarian or vegan, please don’t subject your cats to the same choice. Allow them to be the meat eaters nature designed them to be. As for meat-eating cats depleting the planet’s resources, I’ll worry about that when Allegra and Ruby start driving SUV’s.

19 Comments on Don’t force your cat to be vegan